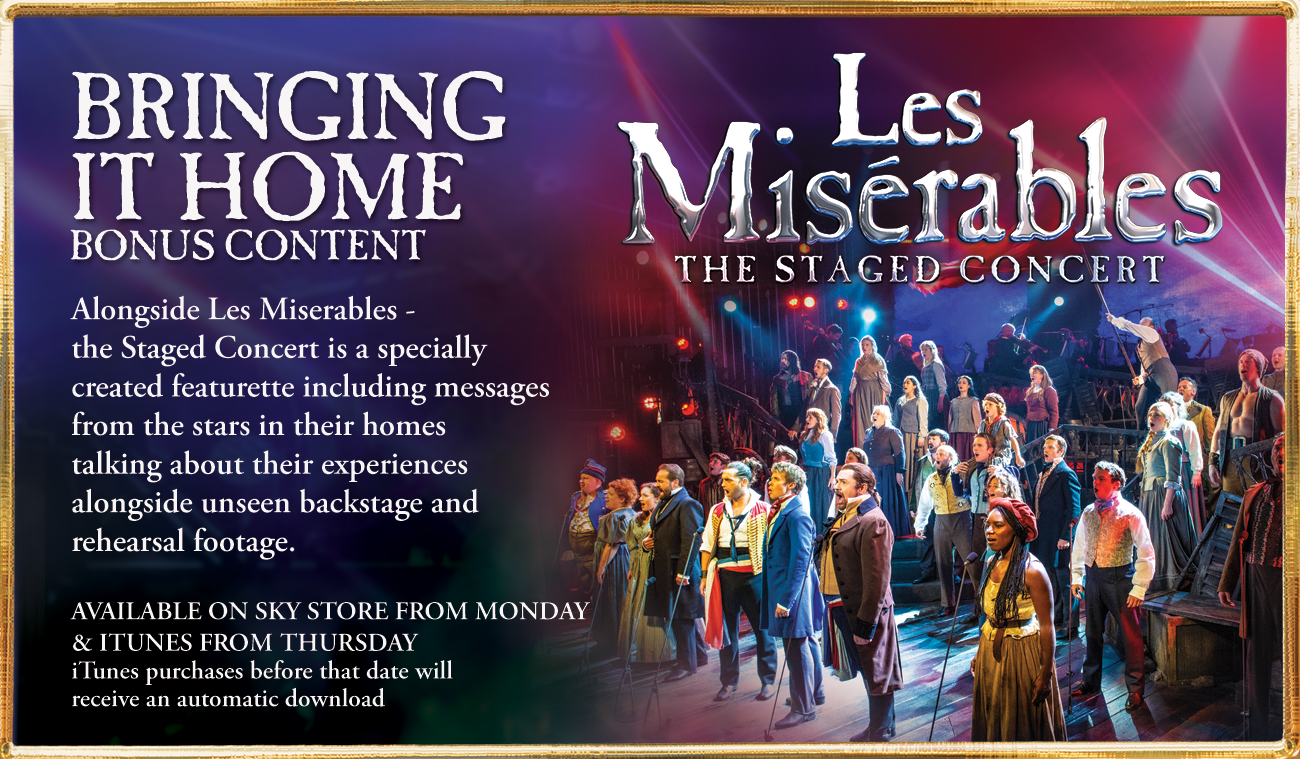 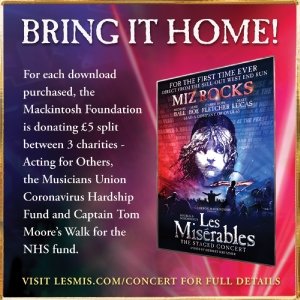 Cameron Mackintosh today (19th April 2020) announces the planned debut of the hugely successful Les Misérables -The Staged Concert on digital download in the UK and Australia, which will also raise much-needed funds for performers, musicians and the NHS. For every digital download, available from Monday 20 April 2020 RRP £9.99, The Mackintosh Foundation will separately donate £5.00 to be shared amongst the charity Acting for Others, the Musicians Union Coronavirus Hardship Fund and Captain Tom Moore’s Walk for the NHS fund. In addition, Mackintosh has launched the fundraising today by donating £100,000 from his Foundation. Anyone who purchases the download will also have the opportunity to donate.

Cameron Mackintosh said: “I am delighted that UPHE Content Group is releasing Les Misérables -The Staged Concert as a digital download at this time of crisis as it also allows my Foundation to help raise much needed funds for particular charities that are under such pressure at the moment. Alongside the concert we will also be releasing a specially created mini documentary “Bringing it Home” which includes footage of the stars at their homes talking about their experiences both of live theatre and the show plus never seen before backstage footage that wonderfully captures the humour, camaraderie and thrill of performing to live audiences in these hauntingly beautiful and exciting historic buildings. In these extraordinary times we hope that fans and everyone who loves the theatre will be reminded of how special a theatrical experience can be, going to the very heart of our British culture, which make our nation so special and unique. I am exceptionally proud of everyone involved in the making of the Concert and very much hope my Foundation will be able to help a raise a considerable amount of money for these deserving charities.”

The spectacular sell-out staging of this legendary concert, with a company of over 65, ran last year at the intimate Gielgud Theatre while the home of Les Misérables at the re-named Sondheim Theatre was undergoing major refurbishments in time for a thrillingly acclaimed re-opening that took place in December last year. Plans are in place for Les Misérables to re-open in the West End in the Autumn once the Government lockdown has ended and the social distancing regulations relaxed, continuing its world record-breaking 35-year run.

Les Misérables‘’ legendary score includes numerous classics including I Dreamed a Dream, On My Own, Stars, Bring Him Home, Do You Hear the People Sing?, One Day More, Empty Chairs at Empty Tables, Master Of The House and many many more.

Les Misérables, produced on stage and screen by Cameron Mackintosh, is conceived by Alain Boublil and Claude-Michel Schönberg and is based on the novel by Victor Hugo. It has music by Claude-Michel Schönberg, lyrics by Herbert Kretzmer and original French text by Alain Boublil and Jean-Marc Natel with additional material by James Fenton and adaptation by Trevor Nunn and John Caird.

UFEG is part of NBCUniversal, one of the world’s leading media and entertainment companies.

The Mackintosh Foundation was formed in 1988. The objects of the Foundation are to advance the education of the public both in the United Kingdom and elsewhere in the arts and in particular the performing arts of music drama and the theatre in all their forms; to assist in the relief of hardship or distress and to relieve sickness and to protect and preserve the health of all persons; to promote the conservation protection, enhancement in the United Kingdom of nature, buildings of architectural scientific historic or public interest. Such other charitable objects in the United Kingdom with particular regard to the theatre, children, the poor, the sick and the homeless.