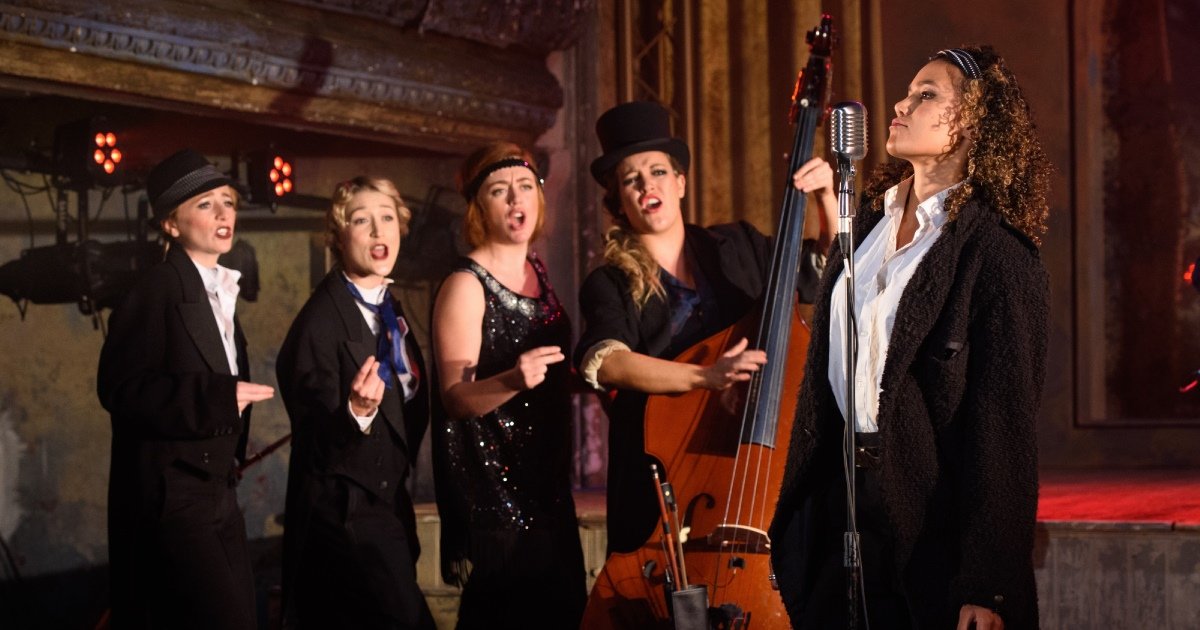 The Watermill Theatre re-imagines Twelfth Night in the 1920s Jazz scene, as twin siblings Viola and Sebastian are separated at sea, and comedy ensues with romance, music and mistaken identity. Paul Hart’s production might not justify the infatuation that so soaks the text, but set on the gorgeous stage of Wilton’s Music Hall, it certainly finds the comedy, and, at times, evokes a genuine pity.

Before that famous opening line of ‘If music be the food of love’, we’re treated to some musical performances by the cast of actor-musicians, led by Sir Toby Belch (Lauryn Redding), who stirs up the audience as we cheer and applaud the band before the house lights have faded. It feels genuine; the music hall setting is immediately contextualised; this is a play where music is at the core. Our characters roam around in flapper dresses, tailcoats and bowler hats, against a jaggedly cut brown and dirty wall, in a design by Katie Lias. Above the wall, we see a purple, hazy sky, setting the scene of a jazzy autumn evening in Illyria.

I suppose one of the issues with performing one of the most performed plays of all times is finding original ways of staging the moments that everyone is likely to know. The revelation of Malvolio’s yellow stockings is, of course, the famous costume moment of the show. Peter Dukes’ Malvolio is played in a straight-laced, no-nonsense, non-responsive kind of way; even when breaking up the fun he seems to hardly react, not even responding to being spat on. It seems a bit bland perhaps. But then when revealing his costume change, Dukes stands behind a changing screen and sticks out one leg at a time, comically building up the full reveal. As he steps out in full, he’s donned not only the cross-gartered stockings, but also a shiny black bob and a face of make-up. I’m not quite sure what the effect of this is supposed to be. There’s something about the simplicity of the yellow stockings that’s lost a little in this costume, and in an attempt to create something more drag-like, it sort of ends up undermining the comedy of the text.

The dialogue at first feels a little stiff; the opening scene a little slow; but once it gets moving, it becomes a lot more authentic. Rebecca Lee’s Viola holds a tear in her eye when speaking of her brother when exclaiming how she would shout from the hills for Olivia. What’s missing in this production is the relationship chemistry that is so terribly important. Viola falls for Orsino almost immediately but with hardly any justification in this production. Olivia’s own falling for Cesario similarly appears out of nowhere, which leads to a deliberation from Lee as she realises ‘I am the man’ that doesn’t warrant the pity from the audience that perhaps it needs. This is a production of Twelfth Night where we’re not invested in the romantic relationships; on the one hand, perhaps this is refreshing, but in a comedy where love is supposedly at the core, it feels romantically bare.

Instead of love, the production plays with the theme of reflection: the large mirrored surfaces which act as entrances against the back wall; the mirrors held towards Malvolio as he’s imprisoned after the letter trick; a moment when Viola disappears through the revolving mirror entrance at the back and Sebastian smoothly takes her place. There’s also an intriguing mirroring of Antonia’s (Emma McDonald) love for Sebastian (Ned Rudkins-Stow) and Malvolio’s obsession with Olivia (Lillie Flynn).

It could be teased out further; there’s more depth in Antonio/a that this production doesn’t really delve into.
This seems to be a version of the play where things must happen behind the scenes. Where infatuations build up in the wings, and we’re almost left to fit together the pieces. And the second half loses its comedy, taking the darker route for Malvolio’s corruption. He becomes a victim of harmful bullying, and a genuine sense of sorrow is evoked as he’s left in darkness in the prison cell; as the light fades down on his muddied, bloodstained body, and ripped stockings. As he storms away from the stage and leaves via the back of the auditorium, I’m not sure we care much for anyone left in the story. The company have been trying to get us on side from the moment we’ve entered the playing space, and now we don’t know what to feel.

As the final lyrics sing out to us ‘That’s all one, our play is done’, from a multi-talented company of performers, we question the ‘play’ at work, and the ‘what you will’ that is often swept away from the title becomes ever so poignant. The play is full of what you wills, in a production which tries to just get on with things and not fall into deep ties with the language, but we’re left with a sickening feeling of how ‘play’, in this instance, leads to a harsh suffering. An innocent man is driven to insanity, and regardless of his flaws, this is surely nothing else but unjust.

Following the success of its run at The Watermill and its UK and international tour last year, The Watermill Ensemble will revive TWELFTH NIGHT at Wilton’s Music Hall from 12 to 22 September. Renowned for its bold, progressive and collaborative approach to Shakespeare, The Watermill Ensemble re-imagines TWELFTH NIGHT in the hedonistic 1920s, where prohibition is rife. Fused with innovative staging and actor-musicianship, the radical spirit of Duke Ellington and Ella Fitzgerald collides with the contemporary influence of Postmodern Jukebox to create a dizzying and beautiful version of Shakespeare’s perfect play.

TWELFTH NIGHT is directed by Paul Hart and designed by Katie Lias. Sound design is by David Gregory, movement by Tom Jackson Greaves and musical direction by Ned Rudkins-Stow. 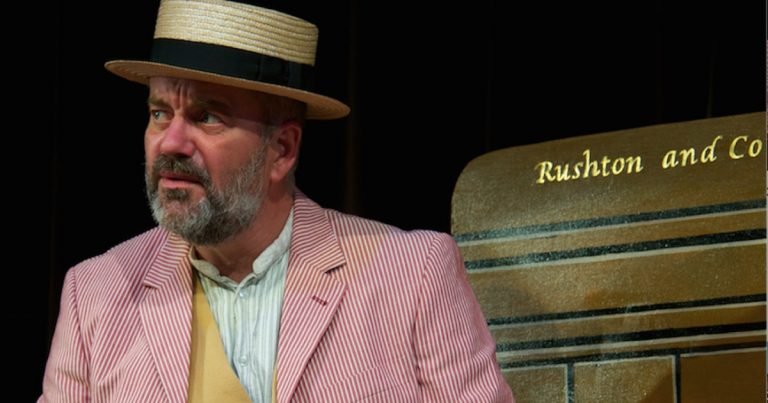