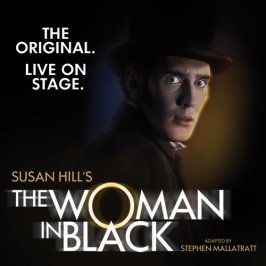 The Woman In Black is one of the most captivating, absorbing and intriguing theatrical performances events.

Extensively praised by the critics, Stephen Mallatratt’s adaptation of Susan Hill’s best-selling novel combines the dramatic effect of live theatre with a cinematic quality embraced by the world of film noir.

A lawyer haunted with a curse that he believes has been cast over him and his family by the spectre of a Woman in Black, engages a sceptical young actor to help him tell his chilling story and finally rid him of the fear that grips his soul.

It all begins innocently enough, but , as they delve deeper into his darkest memories, they find themselves in a land full of eery marshes and howling winds.

Please note that there is a possibility of groups of older teenage school children attending performances of The Woman In Black, particularly for Monday to Thursday performances, as the play is part of the National Curriculum.

The Woman in Black – ‘The original. Live on stage’ Official Trailer 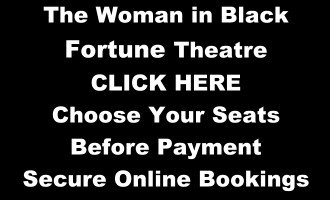 Running Time: 2 hours
Age Restrictions: The Woman in Black is on the National Curriculum for English and Drama, so some performances (especially matinees and on weekdays) are likely to have school groups in attendance.
Show Opened: 1st Jun 1989

Important Info: This play is not suitable for those with a nervous disposition or who cannot handle sudden shocks. Please be advised that there is a large possibility of school groups being present at The Woman In Black, especially for Monday to Thursday performances.