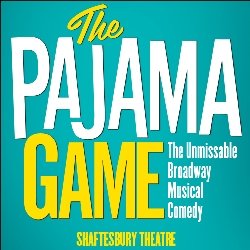 But when the employees are refused a seven-and-a-half cents an hour raise, the pair find themselves riotously at odds in this joyous musical comedy. Will love, eventually, conquer all?

Following a critically acclaimed, sold out run at the Chichester Festival Theatre, Richard Eyre’s sensational production of Broadway classic The Pajama Game transfers to the West End for a limited season.

A buoyantly blissful confection of romance and comedy, the show’s hit-packed golden age score includes Hey There (You With The Stars In Your Eyes), Hernando’s Hideaway and Steam Heat.