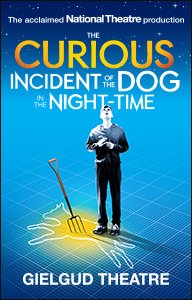 It is seven minutes after midnight and fifteen year-old Christopher stands beside Mrs Shears’ dog Wellington, who has been slain with a garden fork. Christopher writes down each of the known facts in a book, in an effort to solve the mystery of who murdered Wellington.

Christopher has an extraordinary brain, exceptional at maths although not equipped to understand everyday life. He has never gone out alone beyond the end of his road, he cannot tolerate being touched and he doesn’t trust strangers. His detective work, takes him on a frightening journey that turns his inner-world upside down.

The mystery novel of The Curious Incident of the Dog in the Night-Time was written by British writer Mark Haddon. The title quotes from the fictional detective Sherlock Holmes in Arthur Conan Doyle’s 1892 short-story “Silver Blaze”.

The show has transferred from the Apollo Theatre in London’s West End to its new home at the Gielgud Theatre.

Adapted by Simon Stephens and directed by Marianne Elliott.