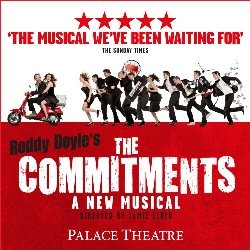 Buy last minute tickets for The Commitments
First it was a best-selling novel, then an international smash-hit movie that spawned a chart-topping band. Now Roddy Doyle’s classic story of a motley bunch of Irish kids who find salvation through soul music comes to the stage for the very first time.

More than two years in the making, this spanking new musical take on The Commitments has been adapted from the novel by Booker Prize-winning author Doyle himself and is set to energise and inspire like never before. Rest assured that Mustang Sally, Mr Pitiful and a host of other classic soul numbers feature front-and-centre.

It’s directed by Jamie Lloyd, whose most recent success was the sell-out Trafalgar Studios production of Macbeth starring James McAvoy.