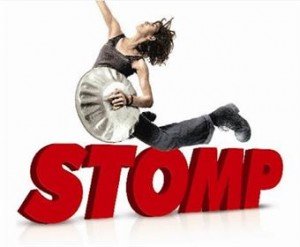 Buy last minute STOMP tickets.
STOMP is a unique fusion of percussion, movement and comedy – STOMP transforms every-day junk and clutter from the home into a source of infectious rhythm.

“Stomp, you see, isn’t just one long performance, it’s sketch based, with each musical number given its own identity. You may not come out humming a tune but you’d easily remember the difference between the number with u-bends and number with the lighters (explaining the fire warning at start).

And the performers aren’t just there to beat bins with brooms; they’re the heart and soul of the show, each with their own recognisable character. There’s the geek/fool who can’t quite get the moves right (and who leads much of the comedy), the “wired one” whose intensity gets on the nerves of his fellow performers and the newbie, desperate to find his place within the company.” Review of STOMP

STOMP is a stylish movement, of bodies, objects, sounds and abstract ideas. However, what makes it so appealing is that the cast uses everyday house-hold objects, but in non-traditional ways. There is no speech, no dialogue, and there is not even a plot.

So why should you go see STOMP? Have you ever composed just tapping with your fingers? Or maybe created a dance routine based on sweeping up? You may have done this on your own, but get a group of rhythmically gifted individuals, and you have the makings for Stomp.

This brilliant act all without without words, in which a company of eight throw themselves body and soul into creating rhythms of every complexity and volume using the most basic found objects (brooms, cigarette-lighters, dustbins and oil drums) is an uplifting hymn to the art of making the most of minimalist means!