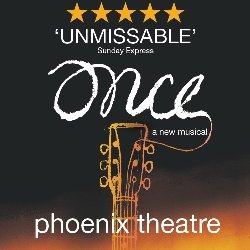 Winner of 2 2014 Olivier Awards including Best Actress in a Musical and Outstanding Achievement in Music. Once is based on the 2006 Irish musical film of the same name, written and directed by John Carney. It has been  brillliantly adapted from stage to screen by Enda Walsh and retains much of the films original Grammy-nominated soundtrack written by Glen Hansard and Marketa Irglova, including the hit song ‘Falling Slowly’, which recieved a 2007 Accademy Award for Best Original Song.

Once opened on Broadway in Feburary 2012, and went on to win an amazing eight awards at the 2012 Tony Awards ceremony. Among the plaudits were Best New Musical and Best Actor. The show also picked up the Drama League Award for distinguished production of a musical for 2011-2012. Zrinka Cvitešić won the 2014 Olivier Award for her performance as Girl in tyhe present West End production.

It tells the story of an Irish musician and a Czech immigrant drawn together by their shared love of music. Over the course of one fateful week, their unexpected friendship and collaboration evolves into a powerful but complicated romance, heightened by the raw emotion of the songs they create together.

Brought to the stage by an award-winning team of visionary artists and featuring an ensemble cast of gifted actor/musicians, Once is a musical celebration of life and love: thrilling in its originality, daring in its honesty… and unforgettable in every way.

On 17th November 2014 Ronan Keating will join the West End cast of Olivier award-winning musical Once, to play the leading role of Guy.

Ronan Keating said:  “I was truly bowled over when I first saw Once. The music and storyline are so incredibly moving and combined with John Tiffany’s direction, I believe it’s a modern-day masterpiece. It’s unlike anything else I’ve ever seen.  When I was asked about playing the lead male (who is a busker in Dublin) I was completely overwhelmed because I knew it would be perfect – this was my home town, my people, and the place where I began my own music career. But as exciting as that is, it’s scary too. I’ve never performed on the West End and this is a huge challenge and commitment.  I’m really looking forward to returning to London later this year and completely sinking my teeth into the role. I think there’s going to be lots to learn and lots to gain from this experience and I just want to be the absolute best that I can be.”

Running Time: 2 hours and 30 minutes
Age Restrictions: Children under the age of 4 are not permitted in the theatre.
Show Opened: 16th March 2013
Booking Until: 4th July 2015