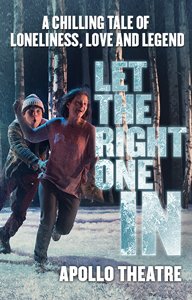 Oskar is a lonely boy from a broken home. He’s bullied at school and is longing for friendship. Eli is a troubled girl who’s just moved in next door. She never goes to school and is compelled to fill an eternal emptiness.

When a series of brutal killings plagues the neighbourhood, these two young misfits make a deep connection, sensing in each other a kindred spirit. But the shocking truth about Eli tests Oskar’s loyalty – and love – beyond all imaginable limits, in a chilling tale of loneliness, love and legend.

Following its fabulous sellout successful run at the Royal Court, the critically-acclaimed South Bank Sky Arts award-winning production of Let The Right One In has transferred to the Apollo Theatre in London’s West End for a limited season.

Tony and Olivier Award-winning director John Tiffany (Black Watch, Once) directs this new production of Let The Right One In, which was adapted for the stage by Jack Thorne coming after the international success of the original Swedish movie and its resulting Hollywood remake. Gore and violence mean it’s recommended for ages 13+.