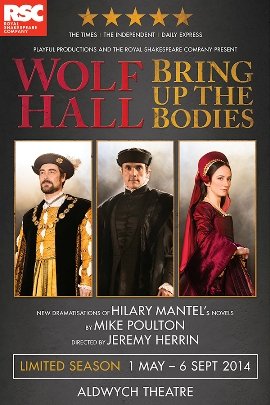 Hilary Mantelʼs prize-winning novels about the rise of Thomas Cromwell through the ranks of British politics to the right hand of Henry VIII have been hailed as a landmark in British culture.

Now these ‘rich and riveting’ (Mail on Sunday) plays of power, passion and politics in Henry’s court transfer to the Aldwych Theatre for a strictly limited London season.

Bring Up The Bodies is the second part of Mantel’s Cromwell series (she’s presently working on the third) and its events follow on directly from those of Wolf Hall. Anne Boleyn is now Queen, her path to Henry’s side cleared by Cromwell. But Henry remains without a male heir, and the conflict with the Catholic Church has left England dangerously isolated as France and the Holy Roman Empire ominously manoeuvre for position.

When the King begins to fall in love with the seemingly plain Jane Seymour, Cromwell must negotiate an increasingly dangerous court as he charms, bullies and manipulates nobility, commoners and foreign powers alike to satisfy Henry, keep the nation safe, and advance his own ambitions.

Bring Up The Bodies is in repertoire with Wolf Hall