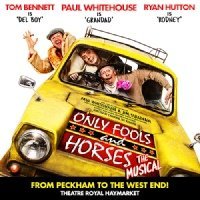 Whitehouse also takes centre stage as Grandad, uniting with Tom Bennett (Del Boy) and Ryan Hutton (Rodney) in this unique showstopper. Featuring cherished material from the TV series, the laughs, dodgy dealings and unforgettable moments to boot, join us as we get reacquainted with Britain’s most loveable rogues and experience the classic comedy brought to life once again through an ingenious and hilarious original score; an idea so inexplicably pukka it surely proves the old adage that he who dares wins!

With musical contributions from Chas n Dave, the beloved theme tunes as you’ve never heard them before and an array of comic songs full of character and cockney charm, you’re guaranteed to have a right knees-up! Only Fools and Horses the Musical is a feel-good, family celebration of traditional, working class London life and the aspirations we all share.

1720 – Carpenter John Potter builds the theatre, on the site of the King’s Head and a gunsmith shop.

1729 – Performed for 30 nights was Hurlothrumbo. During the 1730s Henry Fielding produced several satires attacking both leading political parties, as well as the Royal Family, which so incensed the government of the day that censorship of plays by the Lord Chamberlain was introduced in 1737 – the act was not revoked until September 1968.

1737 – Under the reign of George II, the Licensing Act became law, British citizens attended the theatre in large numbers to voice their grievance which caused the riot act to be enforced by the British Grenadiers and resulted in the closure of the theatre. 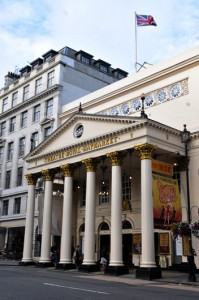 1794 – Many people were injured and twenty people died, when a large crowd pushed to see His Majesty who was attending an evening performance.

1820/21 – The old Playhouse was closed and a new theatre was erected slightly further to the south, giving a pleasing view from St James Square. Designed by the Royal Court Architect John Nash during the remodelling of Regents Park and Regent Street.

1862 – Four hundred nights of Our American Cousin with Edward Southern as Lord Dundreary, adding the word ‘dreary’ to the dictionary. John Buckstone makes a profit of more than £30,000.

1879 – Ownership of the theatre was taken over by the Bancrofts. Auditorium reconstructed which enclosed the stage in the first complete picture frame proscenium. The removal of the pit with the introduction of stalls-seating separated by plain iron arms set a formidable precedent and caused a small riot. 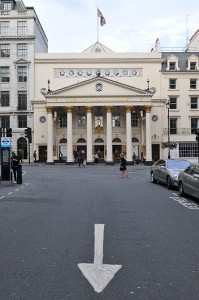 1881 Making her debut at the theatre is Lily Langtry.

1893 – The premiere of the first comedy by Oscar Wilde, A Woman of No Importance, and then An Ideal Husband.

1904 – The Theatre closed for re-laying of the foundations front of curtain, which were designed by Stanley Peach.

1939 – Overseen by Stuart Watson the stalls bar was excavated for work to commence, but then not completed until 1941 due to the start of the war. The Circle and Love for Love, followed by Hamlet, are part of a repertory season by John Gielgud.

1962 – School for Scandal directed by John Gielgud, with Ralph Richardson, Margaret Rutherford, Anna and Daniel Massey, together with The Tulip Tree with Celia Johnson, John Clemente and Lynn Redgrave.

The theatre has a solid reputation for presenting high quality plays – and the actors and actresses who have appeared over the years reads like a who’s who of British theatre.

When you visit the theatre you might just see Buckstone, a friend of Charles Dickens and manager of the Haymarket from 1853-1879, as his ghost is allegedly still seen in the auditorium and dressing rooms, watching over his beloved Haymarket.