Theatre Royal Drury Lane London
The first Theatre Royal was in Brydges Street and seems to have gone unrecorded except for a few passages by contemporary writers. Notwithstanding the comprehensive researches of theatrical historians, the only known facts relate to the site in the Riding Yard, a quadrangle that measured 112 feet in length from east to west, and 58 to 59 feet in width. The area was surrounded by built-up properties on all sides, and was accessed from Brydges Street by a passage, 10 feet wide, entering on the west side, and by a similar passage from Drury Lane on the East.

On 8th May 1663, the day after the opening, Samuel Pepys attended a performance at the new theatre and noted that ‘The house is made with extraordinary good contrivance, and yet hath some faults, as the narrowness of the passages in and out of the pitt, and the distance from the stage to the boxes, which I am confident cannot hear; but for all other things it is well, only, above all, the musique being below, and most of it sounding under the very stage, there is no hearing of the bases at all, nor very well of the trebles, which sure must be mended‘. 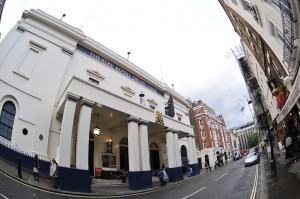 The very first theatre on the site of Drury Lane theatre was opened in 1663 as the Theatre Royal Brydges Street with an audience capacity of about 700. It was constructed by Thomas Killigrew who held one of only two charters granted by Charles II at his Restoration to the throne in 1662. (Oliver Cromwell’s Commonwealth has banned theatres). The theatre is still operated under this Royal Charter and a copy of this is displayed at the theatre. The theatre survived the Great Fire of London in 1666 but burnt down in 1672 (during the times of wooden framed buildings and candles, fire was a significant problem).

The second theatre, opening in 1674, was much bigger and could seat 2,000. The theatre fought against stronger competition for a few years and was eventually impelled to close, but in 1682 the Drury Lane Company and their rivals collaborated under the management of Thomas Betterton. There followed a number of successful years, after which the theatre again found itself in trouble and it was not until the celebrated actor David Garrick took over the management in 1747 that the theatre’s fortunes began to rise. He was succeeded in 1777 by the playwright Richard Brinsley Sheridan (Irish playwright and poet).

In 1791 the theatre was once again rebuilt and opened in 1794 with a seating capacity of 3,611. This held out for only 15 years and was burnt down in 1809. Sheridan did not have the money to rebuild it, but fortunately the brewer Samuel Whitbread who was a shareholder, raised £400,000 and the fourth theatre, which is still standing today, opened on Saturday 10th of October, 1812, with a production of Hamlet with Robert Elliston in the lead role.
Many notable actors have performed in the historic theatres on this site, including Garrick, Grimaldi, Nell Gwynne, Kean and Mrs Siddons. The theatre has hosted musicals including Rose Marie, Show Boat, My Fair Lady and in recent years Oliver!, Shrek and currently (2014) Charlie and The Chocolate Factory.

From December 2005 the Theatre Royal, Drury Lane, has been fully owned by The Really Useful Group Limited.