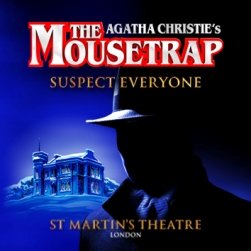 The Mousetrap first opened in 1952 at The Ambassador’s Theatre London and has been running continuously since then. It transferred to St Martin’s Theatre on 25th March, 1974.

The Mousetrap is well known as the world’s longest-running play. Tickets have been bought for Agatha Christie’s The Mousetrap for over 50 years. The reputation of this murder mystery masterpiece continues to rise as new generations of theatregoers head along to try to see if they can figure out who is guilty.

The scene is set when a group of people gathered in a remote part of the countryside, realise to their horror, that there is a murderer in their midst. Who can the murderer be in this classic? One by one the suspicious characters reveal their sordid pasts until at the last, the nerve-wracking moment when the identity and the motive are finally revealed. 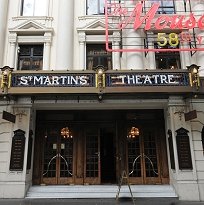 St Martin’s Theatre was designed as a companion to the adjacent Ambassadors Theatre, although these two theatres are really quite different.

In comparison to the decorative plasterwork seen in the Ambassadors Theatre auditorium, St Martin’s Theatre has a natural polished wood interior, which is unique in the West End. Productions here include the 1938 premiere of the popular J B Priestly play When We Are Married. In 1945 Edward Percy’s murder story The Shop At Sly Corner which enjoyed a run of 863 performances.

During the 1970s Anthony Shaffer’s thriller Sleuth had a run of 3 years starting. Needing an uplift the theatre was renovated in 1961. The theatre is undoubtedly best known for its current production of Agatha Christie’s The Mousetrap which recently celebrated its 60th Anniversary. The play originally opened at the Ambassadors Theatre on 25th November, 1952 before transferring to St Martin’s Theatre.