London St Martin’s Theatre Seating Plan: NOTE: Seating Plans may vary from one production to another and these changes may not be shown. 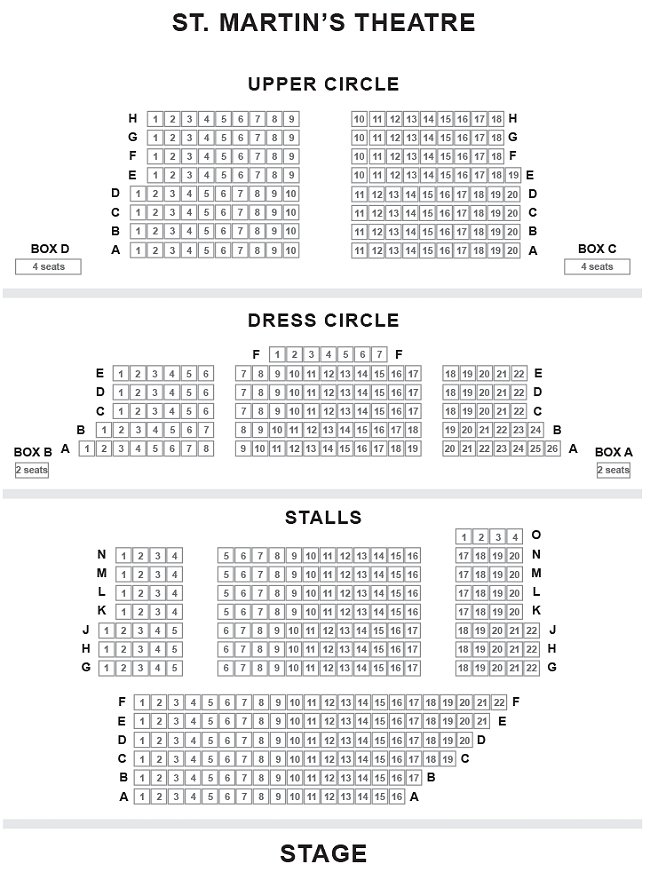 St Martin’s Theatre
During the 1970s Anthony Shaffer’s thriller Sleuth had a run of 3 years starting. Needing an uplift the theatre was renovated in 1961. The theatre is undoubtedly best known for its current production of Agatha Christie’s The Mousetrap which recently celebrated its 60th Anniversary. The play originally opened at the Ambassadors Theatre on 25th November, 1952 before transferring to St Martin’s Theatre.

The Mousetrap
Agatha Christie’s legendary whodunit is still packing them in after more than 60 years in the West End.

The world’s longest-running play has lost none of its form. Indeed, the reputation of this murder mystery masterpeice goes from strength to strength as new generations of theatregoers are tricked and teased by a plot with more twists than a really twisty thing!

A group of people gathered in a remote part of the countryside discover, to their horror, that there is a murderer in their midst. Who can it be? One by one the suspicious characters reveal their sordid pasts until at the last, nerve-shredding moment the identity and the motive are finally revealed.

A cracking yarn and an irresistible treat for amateur sleuths everywhere!