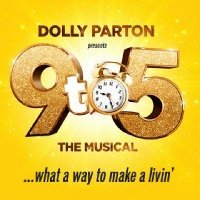 Pour yourself a cup of ambition, and head on down to Dolly Parton’s rollicking West End musical!

9 TO 5 THE MUSICAL is clocking into the West End – with a strictly limited West End season at the Savoy Theatre.

9 TO 5 THE MUSICAL tells the story of Doralee, Violet and Judy – three workmates pushed to the edge by a sexist supervisor. The three ladies tie up their bigoted boss to take revenge and reform the office – but when the CEO pays a surprise visit, everything’s in danger of unravelling…

Presented by Dolly herself, and inspired by the cult film, this uproarious new West End show is about taking care of business – by taking on the man.

The Savoy Theatre
The theatre opened on 10th October 1881 and was designed by C J Phipps, and built by Richard D’Oyly Carte on the site of the old Savoy Palace as a showcase for the popular series of comic operas of Gilbert and Sullivan, which became known as the Savoy Operas.

Its main entrance was on to The Embankment facing The River Thames, and The Savoy Hotel was built in 1889. The money for The theatre and hotel were from Richard D’Oyly Carte arising from the profits of Gilbert and Sullivan’s operettas. The theatre’s entrance was afterwards moved to its current position on Savoy Court in 1902.

Apart from The Mikado and other famous Gilbert and Sullivan premières, the theatre has hosted such distinguished premières as the first public performance in England of Oscar Wilde’s Salome in 1931 and Noël Coward’s Blithe Spirit in 1941. During recent years the theatre has presented opera, Shakespeare, plays, as well as musicals, with revivals of Fiddler on the Roof and Carousel, together with new shows like Never Forget. 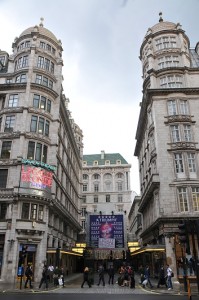 Legally Blonde, the original London production had previews from 5th December 2009, with opening night on 13th January 2010, with the original London cast including Sheridan Smith in the role of Elle Woods, with Duncan James, Alex Gaumond, Jill Halfpenny and Peter Davison. The show played through until 7th April 2012, after 974 performances. Nominated for five Laurence Olivier Awards, Legally Blonde won three, including the Best New Musical award.

Savoy Court provides the forecourt to both the hotel and theatre, and is the only road in Britain where traffic is required by law to drive on the right-hand side, this being originally conferred as a special privilege by Parliament in order that patrons to the Savoy Theatre would be let out of their carriage straight into the theatre.