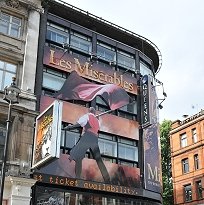 Les Miserables is the world’s most popular musical, being seen by more than 55 million people worldwide. Les Miserables has been performed in twenty-one languages in 40 countries around the world. From its opening in London in October 1985, the production captured the imagination and enthusiasm of audiences. The musical is set in 19th century France, with an amazing score.

The Qeeen’s Theatre
The Queens Theatre was designed as a twin to the Hicks Theatre (now called the Gielgud Theatre). The original idea was to name the venue Central Theatre, however after considerable debate, it was named The Queen’s Theatre and a portrait of Queen Alexandra was placed in the foyer. The first production at the Queen’s Theatre was a comedy by Madeline Lucette Ryley called The Sugar Bowl. It was not received well and ran for only 36 performances.

During the 2nd World War on Tuesday 24th September 1940, a German bomb dropped on the theatre destroying the complete front of house area along with part of the rear stalls. After this bomb damage the theatre was used for rehearsals for a period of time, but the theatre itself was dark for 19 years. 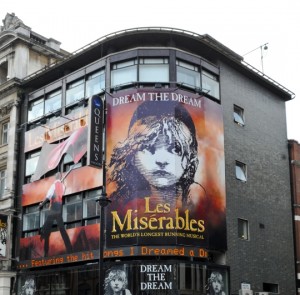 The production at the time of the bomb damage was was Daphne du Maurier’s Rebecca starring Celia Johnson, Owen Nares and Margaret Rutherford. A long time for the theatre to remain dark, and the Gielgud remained closed until a ₤250,000 restoration was completed by Westwood Sons & Partners, with Sir Hugh Casson acting as consultant on the décor, and the auditorium retaining its Edwardian decor while the lobbies and exterior were rebuilt in a modern style. The reconstructed theatre opened on Wednesday 8th July 1959 with John Gielgud’s solo performance with Shakespeare’s Ages of Man.

Productions at the theatre have included the 1961 musical Stop the World I Want To Get Off! with Anthony Newley which had a run of 485 performances. Noel Coward made his final stage appearance in Suite in Three Keys in 1966. Maggie Smith and Robert Stephens appeared in 1972 at the theatre together. 1975 saw Otherwise Engaged had a run of 1029 performances. Kenneth Branagh made his West End debut in Another Country in 1982, and in 1987 Jeffrey Archer’s first play Beyond Reasonable Doubt started a run of 17 months. Recent productions at The Queens Theatre include the Australian song-and-dance show Hot Shoe Shuffle, Stephen Sondheim musical Passion with Michael Ball and Maria Friedman and Masterclass with Patti LuPone.

On 3 April 2004 Cameron Mackintosh’s musical phenomenon Les Miserables transferred from the Palace Theatre where it had run for more than 18 years and an incredible 7,602 performances.