The Book of Mormon

Winner of 4 2014 Olivier Awards including Best New Musical and Best Actor In A Musical.

The Prince of Wales Theatre
The first theatre at this location opened in January 1884 and was called The Prince’s Theatre, designed by C J Phipps. It was subsequently demolished in 1937 to make way for a larger theatre, that is still there today. On 17th June, 1937 Gracie Fields laid the foundation stone of the current theatre, designed by Robert Cromie, and the theatre was named The Prince of Wales Theatre, with Wednesday 27th October, 1937 being opening night. The new theatre continued with its immensely popular non-stop Folies shows that ran continuously from 2pm until just before midnight.

The first productions at the new theatre were Les Folies de Paris et Londres, with George Robey in the lead role, and then in 1938 Folies De Can-Can, which was a continuation of the old theatre’s series of successful risqué revues, and these played continuously until 2.00am each night. The musical comedy, Present Arms, was played in 1940, and then in 1941 the theatre screened the UK premiere of Charlie Chaplin’s The Great Dictator. Banned in many parts of Europe, Alfred Esdaile the theatre’s owner, was fined for screening it. 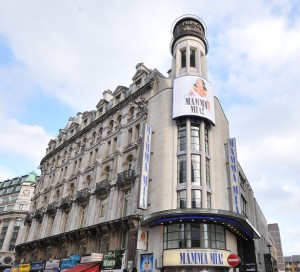 In 1943, Strike a New Note included Sid Field’s London debut, and he returned again in Strike it Again (1944), and yet again in Piccadilly Hayride (1946, a revue that ran for 778 performances). Mary Coyle Chase’s comedy Harvey, about an imaginary rabbit, was a success in 1949, as was Diamond Lil in 1948 starring Mae West. During the 1950s, the theatre hosted variety and revues, starring performers including Gracie Fields, Hughie Green, Benny Hill, Bob Hope, Frankie Howerd, Peter Sellers, Norman Wisdom, and the duo of Morecambe and Wise. 1959 saw Paul Osborn’s The World of Susie Wong which became the theatre’s longest-running play to date with 832 performances.

Come Blow Your Horn, Neil Simon’s play, starring Michael Crawford, played in 1962, followed by a season of Martha Graham’s dance company, including the world première of her ballet Circe.

During 1963, alterations were made to the stage and the theatre was reopened on Saturday 28th March, 1964. The Stalls Bar is located under the stalls seating area and has a dance floor originally designed for tea dances. Notable productions here include in 1959 The World of Susie Wong, 1966 with Funny Girl and starring Barbra Streisand, 1967 saw Sweet Charity and Guys and Dolls in 1985.

Aspects of Love, an Andrew Lloyd Webber musical, opened in January 1989 and run for 1,325 performances. Barry Manilow’s musical Copacabana played at theatre for just over a year in 1994. On Saturday 18th August 2007, Mamma Mia!, with 1326 performances, became the longest-running show at the theatre, overtaking the record set by Aspects of Love.

The Prince of Wales Theatre
Coventry St, London W1D 6AS