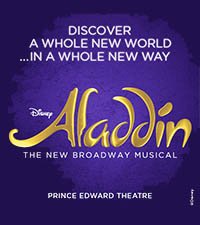 Brought to theatrical life by a legendary creative team, Disney’s new Broadway musical Aladdin will sweep you into a world filled with beauty, comedy and breath-taking spectacle when it opens at the Prince Edward Theatre, London in June 2016.

Featuring the timeless songs from the classic film including A Whole New World, Friend Like Me and Arabian Nights along with new music written for the production, Aladdin is an extraordinary theatrical event you will want to be amongst the first to experience.

Prince Edward Theatre
The Prince Edward Theatre opened on Thursday 3rd April 1930 with the romantic musical comedy, Rio Rita, set in Mexico and starring Edith Day and Geoffrey Gwyther. The show had been a success at New York’s Ziegfeld Theatre, but did not find similar success in London audiences and closed after only 59 performances.

The theatre was designed by Edward A. Stone, who had been one of the architects of the Piccadilly Theatre in 1928. Interior decorations were by Marc-Henri Levy and Gaston Laverdet. The arched doorways led through to a circular foyer, decorated in art deco style, with staircases leading to the stalls and dress circle. The external aspect of the theatre was in the style of an Italian palazzo , while inside it was decorated in fuchsia and gold. The auditorium seated 1,650 people, with fully upholstered tip-up seats (at that time still something of a novelty). 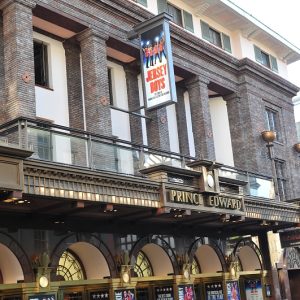 One of the features that attracted most attention was the proscenium arch made up of a series of niches with amber glass covers designed by René Lalique with pseudo-fountains also by Lalique on each side.

The musical Nippy starring Binnie Hale, opened in October 1930. A number of short-runs followed which included Fanfare, a period revue with Bernard Clifton and June (Lady Inverclyde) that lasted only three weeks. In 1932 Un Vent de Folie brought publicity of a different kind when the Lord Chamberlain demanded the removal of four 18ft tall female figures erected outside the theatre for promotional purposes. Being quite close to Soho, the response came from the producer, Jack Taylor, saying ‘True they are scantily clothed, but for my part I can see nothing in them’.

The cabaret artiste Josephine Baker made her London debut in 1933; billed as ‘The Idol of Europe’, her star turn was the renowned ‘Banana’s Dance’ previously seen at the Folies Bergere in Paris. After being the venue for a number of trade film-shows it seemed ominous when Aladdin closed in January 1935 with insufficient money to pay the artistes wages. However, a syndicate was formed and it re-opened on Thursday 2nd April 1936 as the London Casino with a revue called Folies Parisiennes, one of the most popular numbers being ‘Ladies and Their Dogs’ in which the ladies matched their dogs – a lady wearing a chic spotted dress would be accompanied by a dalmation and another wearing tartan trotted on with a Scottie.

From 1940 the war and blitz meant that the theatre was dark. However, in July 1942 it became the home of the Queensberry All-Services Club. The audiences came from the different armed-forces who gathered for the recording of shows like Variety Band Box. Foremost artists who appeared included Vera Lynn, Jack Warner, Max Wall, Flanagan and Allen, child star Petula Clark and band-leaders Glenn Miller, (Bert )Ambrose and Jack Hylton.

After the war the theatre reopened as the London Casino, managed by Tom Arnold and Emile Littler, with the drama Pick-up-Girl followed by a revival of Ivor Novello’s popular musical The Dancing Years. 1947 onwards saw mostly variety shows hosted, with a highlight being The Ink Spots famous for the song ‘Whispering Grass’ playing to packed houses. Robert Nesbitt presented a series of Latin Quarter revues and there was a traditional annual pantomime. 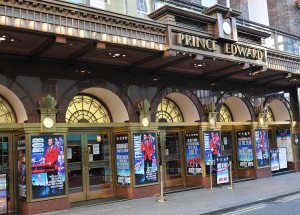 Mona Inglesby’s International Ballet Company gave an autumn season in 1948 that included Dorothy Stevenson’s Sea Legend, which was the first time an Australian ballet had been performed in this country.

In 1954 Cinerama arrived and the theatre was converted to accommodate a curved 64ft wide screen with three projectors to create a three-dimensional effect. Running continuously for more than two years was How the West Was Won, together with Stanley Kubrick’s 2001: A Space Odyssey which was on for more than a year. Bernard Delfont brought the pantomime Cinderella to the thetare, in 1974, and starring Twiggy.

The theatre was finally able to establish itself as the venue for musicals, for which it had originally been built, was Evita which ran from Wednesday 21st June 1978 for almost eight years, closing on 18th February 1986, after 3,176 performances, and winning the Laurence Olivier Award for Best Musical along the way.
It was the first of a new generation of musicals written by Andrew Lloyd Webber and Tim Rice that brought the leading lady, Elaine Paige, to the limelight. To coincide with the opening the theatre reverted to its original name of the Prince Edward Theatre. Following this was a three year run of Tim Rice’s Chess and later by Anything Goes, which also starred Elaine Paige.

In 1990 Bernard Delfont and Cameron Mackintosh rebuilt the Prince Edward, with more than £3 million spent on a complete refurbishment which included increasing the depth and width of the stage, improving the acoustics, remodelling and redecorating the auditorium, adding side boxes to improve the spacial relationship between different areas of the theatre and new interior and exterior lighting.

The Prince Edward reopened on Wednesday 3rd March 1993 with Crazy for You. In 1996 Cameron Mackintosh brought his own show, Martin Guerre, to the theatre written by the award-winning pair, Alain Boublil and Claude-Michel Schonberg, which had a run of almost two years. Mamma Mia! broke all previous box office records when it sold out for five years before transferring to the Prince of Wales Theatre in June 2004.

The Mozart Bar in the entrance foyer is named as such because Wolfgang Amadeus and his father lived at 28 Frith Street, now the theatre’s stage door, from 1764 to 1765.