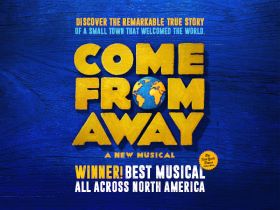 Discover the remarkable true story of a small town that welcomed the world.
As it continues sold-out, record-breaking engagements on Broadway, across the USA and in Canada,

Come From Away landed for its UK premiere at London’s Phoenix Theatre from 30th January 2019.

This joyous new musical shares the incredible real-life story of the 7,000 air passengers from all over the world that became grounded in Canada during the wake of 9/11, and the small Newfoundland community that invited these ‘come from aways’ into their lives.

As uneasiness turned into trust and music soared into the night, gratitude grew into friendships and their stories would become a celebration of hope, humanity and unity.

Awarded the Tony® for Best Direction of a Musical, Christopher Ashley’s production guides audiences through a colourful and spirited cast of characters, brought to life by Tony® and Grammy® nominated writing team Irene Sankoff and David Hein.

While the elevation of this theatre which fronts onto Charing Cross Road looks somewhat simplistic, the art deco interior which was designed by the Russian director and designer Theodore Komisarjevsky is superb. In the 1970’s the entrance to the theatre was moved from Charing Cross Road to Phoenix Street, while the Advance Box Office is half-way between the two in Charing Cross Road.

In 1986 part of the nearby car park, which had been a former bomb site, was used to build a cinema, and this has now been demolished to make way for residential development. Karl Marx once lived in the building which is one of the oldest in Soho. But its claim to fame in the 20th century was as “Leoni’s Quo Vadis”, one of London’s most esteemed Italian restaurants founded in the 1930s by Peppino Leoni. 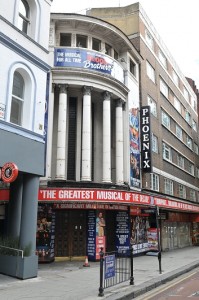 The charm of the ground floor restaurant with its stained glass windows and relatively simple interior has been restored and a menu devised whose range and quality have won instant acclaim. The striking works of art displayed within the restaurant are created in honour to such luminaries as Lucio Fontana and Alberto Giacometti. Showing for many years was Blood Brothers by Willy Russell. Current showing is Once a new musical.