Based on an original new story by J.K. Rowling, Jack Thorne and John Tiffany, Harry Potter and the Cursed Child, a new play by Jack Thorne, will have its world premiere at the Palace Theatre in London’s West End in the summer of 2016.

Produced by Sonia Friedman Productions, Colin Callender’s Playground Entertainment and Harry Potter Theatrical Productions, tickets for Harry Potter and the Cursed Child will go on public sale autumn 2015, details of which will be announced summer 2015 and will be shared on the official website in late July.

Harry Potter and the Cursed Child will be directed by John Tiffany with movement by Steven Hoggett, will have set designs by Christine Jones, costumes by Katrina Lindsay, lighting by Neil Austin, music by Imogen Heap, sound by Gareth Fry and special effects by Jeremy Chernick.

J.K. Rowling is the author of the seven Harry Potter novels, which have sold over 450 million copies and have been translated into 78 languages, and three companion books originally published for charity. She is also the author of The Casual Vacancy, a novel for adults published in 2012, and, under the pseudonym of Robert Galbraith, is the author of the Cormoran Strike crime series. She is currently working on a screenplay for the film Fantastic Beasts and Where to Find Them, based on the characters in her Harry Potter companion book of the same name.

Jack Thorne writes for theatre, film, television and radio. His theatre credits include Hope and Let The Right One In both directed by John Tiffany, Bunny for the Edinburgh Fringe Festival, Stacy for the Trafalgar Studios, 2nd May 1997 and When You Cure Me for the Bush. His adaptations include The Physicists for the Donmar Warehouse and Stuart: A Life Backwards for Hightide. On film his credits include War Book, A Long Way Down and The Scouting Book for Boys. For television his credits include The Last Panthers, Don’t Take My Baby, This Is England, The Fades, Glue and Cast-Offs. In 2012 he won BAFTAs for best series (The Fades) and best serial (This Is England 88).

John Tiffany directed Once for which he was the recipient of multiple awards both in the West End and on Broadway. As Associate Director of the Royal Court, his work includes The Twits, Hope and The Pass. He was the director of Let The Right One In for the National Theatre of Scotland, which transferred to the Royal Court, West End and St. Ann’s Warehouse. His other work for the National Theatre of Scotland includes Macbeth (also Broadway), Enquirer, The Missing, Peter Pan, The House of Bernarda Alba, Transform Caithness: Hunter, Be Near Me, Nobody Will Ever Forgive Us, The Bacchae, Black Watch, for which he won the Olivier and Critics’ Circle Best Director Awards, Elizabeth Gordon Quinn
and Home: Glasgow. Other recent credits include The Glass Menagerie at A.R.T and on Broadway and The Ambassador at BAM. Tiffany was Associate Director of the National Theatre of Scotland from 2005 to 2012, and was a Radcliffe Fellow at Harvard University in the 2010-2011 academic year.

Steven Hoggett has previously collaborated with John Tiffany on The Twits for the Royal Court, Let The Right One In and Black Watch for the National Theatre of Scotland and Once on Broadway and in the West End. Hoggett was a founding co-artistic director of Frantic Assembly for which his credits include The Curious Incident of the Dog in the Night-Time, Lovesong, Othello, Little Dogs, Beautiful Burnout, Stockholm, Pool (No Water) and Dirty Wonderland. His other recent credits include The Light Princess and Dido Queen of Carthage for the National Theatre, The Full Monty for Sheffield Theatres and the West End, Brooklynite for the Vineyard Theatre, Rigoletto for the Metropolitan Opera, What’s It All About? for the New York Theatre Workshop and American Idiot, Peter and the Starcatcher, The Last Ship and Rocky The Musical on Broadway. His film credits include How To Train Your Dragon 2 for Dreamworks.

Christine Jones is a Tony-award winning set designer and the Artistic Director of the critically acclaimed Theatre for One in New York. Her West End set design credits include Let The Right One In and Spring Awakening. On Broadway her credits include American Idiot, for which she won the Tony Award for Best Scenic Design of a Musical in 2009, Hands on a Hardbody, On a Clear Day You Can See Forever, Spring Awakening for which she was Tony Nominated and Everyday Rapture. Jones made her debut at The Metropolitan Opera in 2012 with her designs for Rigoletto. She has designed sets for The Book of Longing, based on the poems of Leonard Cohen, with music by Philip Glass for the Lincoln Center Festival, The Onion Cellar which she co-created with director Marcus Stern and The Dresden Dolls, Much Ado About Nothing for Shakespeare in the Park, Burn This for Signature Theatre and True Love, for which she created The Zipper space, infamous for its use of car seats in the audience.

Katrina Lindsay’s costume design credits include Bend It Like Beckham at the Phoenix Theatre, American Psycho for the Almeida Theatre, wonder.land and Earthquakes in London for the National Theatre and Love’s Labour’s Lost for the Royal Shakespeare Company. She is designing costumes for the forthcoming production of Hamlet at the Barbican with Benedict Cumberbatch in the title role. As a set and costume designer, she has worked with the National Theatre, Royal Shakespeare Company, Chichester Festival Theatre and the Young Vic amongst others. Lindsay, who also designs for opera, dance, film and television, won the 2008 Tony, Outer Critics Circle and Drama Desk Awards for Outstanding Costume Design for Les Liaisons Dangereuses on Broadway and is a recipient of an Arts Foundation Fellowship in Costume Design.

Self-produced, British recording artist Imogen Heap is also known as one half of Frou Frou. Her music is present in countless films and TV from the blockbusters to the indies. Amongst her four solo albums, she has gathered 4 Grammy nominations, winning Best Engineered Album, Non classical for Ellipse. In 2010 she received the Ivor Novello Award for International Achievement and remains a major pioneer in the development of new musical expression devices and ways to interact with her audience. Heap is currently collaborating on a new system for music sharing using the blockchain.
www.harrypottertheplaylondon.com

The Palace Theatre
Producer of the Gilbert and Sullivan operas, Richard D’Oyly Carte, commissioned the construction of the Palace Theatre in the late 1880s, and it was designed by Thomas Edward Collcutt who intended it to be a residence of English grand opera.

With Opening Night in January 1891 opening as the Royal English Opera House with a lavish production of Arthur Sullivan’s opera Ivanhoe, which run for 160 performances, André Messager’s La Basoche followed shortly after, Carte had no other works available to fill the theatre, and grand opera fell flat. The theatre was re-opened as the music hall, Palace Theatre of Varieties.

In 1897, the theatre began to screen films as part of its programme of entertainment. In 1904, Alfred Butt took over as manager and carried on combining variety entertainment, including dancing girls, with films. Herman Finck was musical director at the theatre from 1900 until 1920. The Marx Brothers appeared at the theatre in 1922, performing extracts from their Broadway shows. 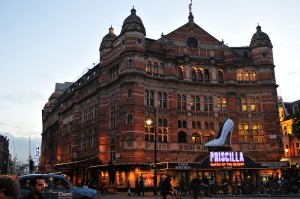 In 1925, the musical comedy No, No, Nanette opened, followed by other musicals, for which the theatre became recognised.

Restoration at the theatre took place in the late 1950s when the interior marble work was painted over but thankfully during the last half of the 1980s the theatre was extensively restored to its former glory without closing the theatre.

The interior paintwork was removed to reveal again the marble and onyx, while on the exterior the huge illuminated billboards and advertising materials were removed to provide a clear view of the building which has a prominent position on Cambridge Circus at the Junction of Shaftesbury Avenue with Charing Cross Road. 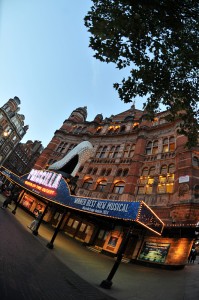 In 1925 No No Nanette! running for 655 performances, in 1946 Song of Norway, in 1949 839 performances of King’s Rhapsody, in 1961 The Sound of Music for 2385 performances, in 1968 Cabaret, and 1972 Jesus Christ Superstar which had a run of 3358 performances. Les Miserables first opened at the Barbican on 8th October 1985 before then transferring to the Palace Theatre on 4th December 1985. On Monday 10th January, 1994, Les Miserables became the Palace Theatre’s longest running show, before eventually transferring to the Queen’s Theatre in April 2004.

Currently showing is The Commitments, with previews from 21st September 2013 and opening night on 8th October 2013.