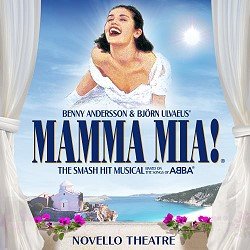 MAMMA MIA! is a feel-good musical full of the music from Abba. Catherine Johnson’s witty and ingenious script entwines the famous ABBA songs around characters from that you can’t help but love. As the show comes to a conclusion almost everyone in the audience is on their feet, singing and swaying along to the music.

MAMMA MIA! is a musical written by British playwright Catherine Johnson, with the songs of ABBA at its heart. Classic hit-songs such as Dancing Queen, I Have a Dream, and Take a Chance on Me, are inter-woven within the story-line of love, laughter and friendship. Shortly before her wedding, a daughter’s quest to discover her father’s identity, reunites three men from her mother’s enjoyable, and passionate past, to a Greek island paradise.

Through the story-telling of the songs from ABBA. MAMMA MIA! introduces us to Donna, a forty+ single parent, who along with with her two best friends, recall distant memories of carefree days and careless nights while her daughter Sophie dreams of tradition, romance and a white wedding.

MAMMA MIA! transports you to a small mythical Greek island as we share an unforgettable time in the lives of our heroines, surrounded by dance and music beneath the sun.

The theatre was constructed as one of a pair with the Aldwych Theatre, each one either side of the Waldorf Hotel, with both theatres designed by W G R Sprague. The theatre opened on Monday 22nd May, 1905 as the Waldorf Theatre and was renamed the Strand Theatre in 1909. Sprague designed no fewer than 33 new theatres during his 40-year career.

It was renamed again in 1911 as the Whitney Theatre before being re-named the Strand Theatre in 1913.

In the 1940s, the black comedy Arsenic and Old Lace had a run of 1337 performances, and Sailor Beware for 1231 performances from 1955. The musical A Funny Thing Happened on the Way to the Forum by Stephen Sondheim opened on the same day as the assassination of the US President Kennedy, 22nd November 1963, running for almost two years. In 1971 the comedy No Sex Please We’re British opened, remaining at the theatre for over 10 years of its 16-year run before it transferred to the Garrick Theatre in 1982.

The theatre was extensively renovated in 1930 and once again in the early 1970s. For its centenary anniversary in 2005, there was another extensive refurbishment programme.

It reopened on Thursday 8th December 2005 with the Royal Shakespeare Company’s annual London season, with 4-week long runs of Twelfth Night, The Comedy Of Errors, As You Like It, and A Midsummer Night’s Dream concluding in March 2006. In 2005, the theatre was renamed by owners Delfont Mackintosh as the Novello Theatre in honour of Ivor Novello. The current capacity is around 1,050.