About All About Eve

“Fasten your seat belts. It’s going to be a bumpy night.”

Margo Channing. Legend. True star of the theatre. The spotlight is hers, always has been. But now there’s Eve. Her biggest fan. Young, beautiful Eve. The golden girl, the girl next door. But you know all about Eve…don’t you…?

Ivo van Hove directs Gillian Anderson and Lily James in his new adaptation of All About Eve, a razor-sharp, unsettling exposé of the eternal obsession at the heart of show-business. BAFTA Award-winner Monica Dolan will join the cast in the role of Karen, alongside Julian Ovenden as Bill, Sheila Reid as Birdie and Rhashan Stone as Lloyd. Further casting to be announced.

Lifting the curtain on a world of jealousy and ambition, this new production, from one of the world’s most innovative theatre directors, asks why our fascination with celebrity, youth and identity never seems to get old.

Originally called the New Theatre, opening on Thursday 12th March 1903, and built by Sir Charles and Mary Wyndham behind Wyndham’s Theatre which, was completed in 1899.

Designed by W. G. R. Sprague, the building has an exterior in the classical style and an interior in the Rococo style.

In 1915 Dion Boucicault presented a Christmas revival of J M Barrie’s Peter Pan, which was then repeated until 1919. The theatre also staged a number of successful productions by other distinguished writers such as Somerset Maugham, A A Milne, Noel Coward, Bernard Shaw, Dylan Thomas, T S Eliot and Tennessee Williams. Noël Coward appeared in his own play, I’ll Leave It To You in 1920, the first West End production of one of his plays. 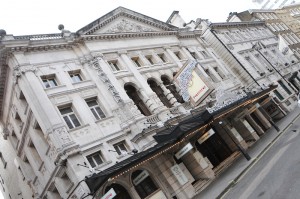 The sixties were ruled by Lionel Bart’s Oliver! which ran for 2618 performances.

A number of famous actors have appeared on stage at the theatre including Sir Laurence Olivier, Sir John Gielgud, Sybil Thorndike, and Peggy Ashcroft.

In 1973 the theatre was renamed the Albery in tribute to Sir Bronson Albery who had presided over the theatre for numerous years.
The theatre underwent major renovation in 2006, and was renamed the Noël Coward Theatre when it re-opened for the London premiere of Avenue Q on Thursday 1st June 2006.

The theatre has seen many diverse productions such as Somerset Maugham’s The Constant Wife, Children of a Lesser God by Mark Medoff, Tom Stoppard’s Travesties and of course Willy Russell’s Blood Brothers.