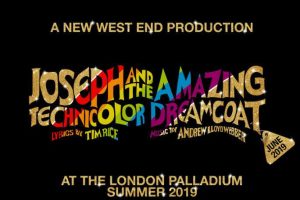 Joseph And The Amazing Technicolor Dreamcoat
A new production of Andrew Lloyd Webber and Tim Rice’s multi-award winning musical is returning to The London Palladium in summer 2019 for a strictly limited run!

Released as a concept album in 1969, Joseph and the Amazing Technicolor Dreamcoat has become one of the world’s most iconic musicals, featuring songs that have gone on to become pop and musical theatre standards, including Any Dream Will Do and Go Go Go Joseph.

The beloved show has been performed hundreds of thousands of times including multiple runs in the West End and on Broadway, international number one tours, and productions in over 80 countries.

London Palladium
During the 1880s the site of the London Palladium was home to Hengler’s Circus. Constructed in 1910 the theatre was at first called The Palladium and was popular for presenting variety.

In 1931 the London Palladium saw the emergence of a group of comedians who formed what was to be known as the Crazy Gang who performed at the theatre from June 1931 to October 1939. The name change to The London Palladium occurred in 1934.

In 1945, Val Parnell took over as Managing Director, bringing in big-name American acts at the top of the bill. 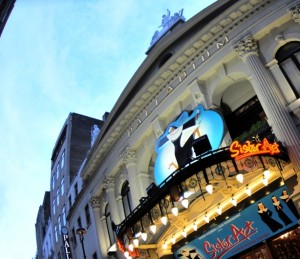 From the 1980s the London Palladium become associated with large scale musicals including: The King and I with Yul Brynner and Virginia McKenna, Michael Crawford in Barnum, Singin’ in the Rain with Tommy Steele, Topol in Ziegfeld , George Hearn and Denis Quilley in La Cage Aux Follies, the Opera North/Royal Shakespeare Company’s production of Show Boat, Jonathan Pryce in Oliver! and Michael Ball in Chitty Chitty Bang Bang. More recently the Palladium has been host to Sister Act, The Wizard of Oz, and A Chorus Line. Next in line is I Can’t Sing The X Factor Musical arriving in 2014.

Deprecated: Directive 'allow_url_include' is deprecated in Unknown on line 0