Andrew Lloyd Webber’s incredible masterpiece The Phantom of The Opera, carries on with its unprecedented West End run. Based on Gaston Lerouxs gothic novel, is a story of love, seduction and despair.

The Phantom of the Opera is set in the Paris Opera House in the 19th century, where the disfigured Phantom terrorizes the occupants. Based on the French thriller about a terrifying and legendary figure who emerges from the dark depths of The Opera House, and who materializes as the mythical opera ghost in terrifying reality.

The masked Phantom falls in love with the beautiful young soprano Christine Daae, and takes her to his lair in the depths of the theatre, to encourage her to sing “like an angel”. To begin with, Christine becomes entranced by him, but she loves another: Raoul, a handsome nobleman and patron of the Opera. Christine is faced with the choice of staying with the Phantom, otherwise he will kill Raoul. Without a doubt, The Phantom of the Opera is Andrew Lloyd Webber’s jewel in his crown.

Interview with Phantom Gerónimo Rauch
You are now playing the role of The Phantom at Her Majesty’s Theatre London. Is this the pinnacle of your career, and where your career has always been heading?
I never thought I would ever be at this point but now that I’m here I want to dream higher.

I have heard you say that for The Phantom, “the rehearsal journey was very lonely”. Is it a lonely role to play?
Yes, it is a very lonely role but it helps to build the character. I hardly see anyone before going on stage.

The Phantom of the Opera

The present Her Majesty’s Theatre building is actually the 4th theatre to occupy this location. The first one was called The Queen’s Theatre, being built by Sir John Vanbrugh and opening on Monday 9th April 1705. 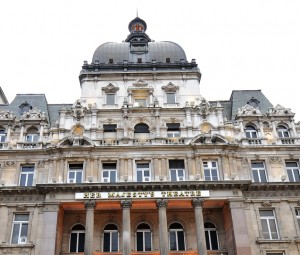 In 1869, the theatre was re-built a third time, for Lord Dudley, this time designed by Charles Lee and their partner, William Pain. The new theatre was designed to be less prone to fire, with brick firewalls, iron roof-trusses and Dennett’s patent gypsum-cement floors. Further misfortune followed, when as a result of a dispute over rent and a decline in the popularity of ballet, the theatre remained dark until 1874, then sold to a Revivalist Christian group for £31,000.

In 1892 the theatre was demolished leaving only the Royal Opera Arcade. The present and 4th theatre on the site was designed by C J Phipps and opened on Wednesday 28th April 1897.

With profits that Herbert Beerbohm Tree made from his success at the Haymarket Theatre, he built the theatre, owning it, managing and living in the theatre from its construction until his death in 1917. 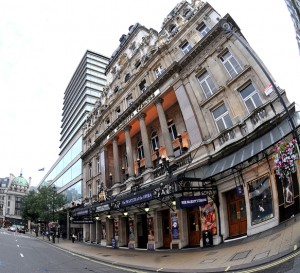 The theatre opened with Gilbert Parker’s The Seats of the Mighty. Subsequent productions included adaptations of Dickens, Tolstoy, as well as classical works from Molière and Shakespeare. The theatre also hosted on 11th November 1909, the world première of J. M. Synge’s The Tinker’s Wedding. In 1914, Tree starred as Henry Higgins and Mrs Patrick Campbell as Eliza, in George Bernard Shaw’s Pygmalion.

In 1916 Oscar Asche starred in Chu Chin Chow, beginning its record-breaking run of 2,235 performances at the theatre. Tree’s productions were known as being quite elaborate, with spectacular scenery and effects, often including animals and real grass. These continued to be both popular and profitable, but in his final decade, Tree’s acting style was seen as increasingly outdated, and many of his plays received poor reviews. Tree defended himself from critical censure, showing his continuing popularity at the box office until his death.

In 1904, Tree founded the Academy of Dramatic Art (subsequently RADA), which spent a year based in the theatre. Tree continued to take graduates of the Academy into his company at His Majesty’s, employing 40 actors with this method by 1911.

Subsequent notable productions: In 1929 Bitter Sweet by Noel Coward was produced and enjoyed a run of 697 performances. Musicals continued to be prominent at the theatre after the Second World War II, with transfers of the Broadway productions of Follow the Girls in 1945 for 572 performances, and the Lerner and Loewe musicals Brigadoon in 1949 with 685 performances and Paint Your Wagon in 1953 with 478 performances.

1958 saw the opening of West Side Story, and in 1967 Fiddler On The Roof, which had a run of 2,030 performances. The current production of The Phantom of the Opera, opened on Thursday 9th October 1986.

Photographs taken on 10th September 2010 – all images copyright to Neil Cheesman at www.LastMinuteTheatreTickets.com