With poetic precision, rich humour and an extraordinary emotional force, Betrayal charts a compelling seven-year romance, thrillingly captured in reverse chronological order. The complexi-ties of the human heart are explored in this, “the greatest, and the most moving, of all Pinter’s plays” (The Daily Telegraph). Betrayal was first produced by the National Theatre in 1978. The orig-inal cast featured Pinter at the Pinter company members Penelope Wilton and Michael Gambon.

Tom Hiddleston returns to the London stage following his acclaimed Hamlet directed by Kenneth Branagh and his Evening Standard Award-winning performance in Coriolanus at the Donmar Warehouse in 2014. Hiddleston will star alongside Zawe Ashton and Charlie Cox.

Pinter at the Pinter is the unprecedented season of Harold Pinter’s work, marking ten years since the Nobel Prize winner’s death. The season celebrates the most important playwright of the 20th century in the theatre that bears his name.

With the curtain-raising on 15th October 1881, this Victorian theatre only underwent six months to construct, and was in the beginning known as the Royal Comedy Theatre, with The Royal being discarded by 1884.

The theatre’s reputation was increased during the First World War when C B Cochran and André Charlot presented their review shows.

Substantial reconstruction took place in the mid-1950’s with the theatre reopening on 14th December, 1955. 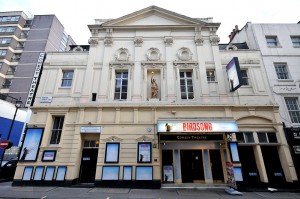 One characteristic of this theatre is the use of columns to support the circle seating areas, which signifies that a number of the seats have a slightly restricted view.
The Comedy Theatre was perhaps best known for the role it played in the late 1950s, assisting in overturning stage censorship.

Later productions include the award-winning comedy Steaming, and the fabulous award-winning musical Little Shop of Horrors making its West End debut in 1979, both of which played at The Comedy in the early 1980’s.