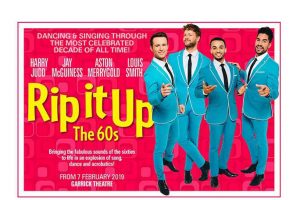 The ultimate strictly boy band of dance bring the 60’s smashing into the 21st century, in an explosion of song, dance, acrobatics and amazing visuals!

Aston Merrygold (JLS) and Jay McGuiness (The Wanted) sing, while Harry Judd (McFly) is on drums and Olympic champion Louis Smith performs amazing gymnastic feats. But what shines through the most in this spectacular show is the fab four’s phenomenal dancing talent!

The boys are joined by an incredible cast of dancers, singers and musicians, to celebrate the iconic sounds, sights and events of the decade which transformed the 20th Century.

One of the most energetic shows to ever hit the West End stage, just watching will leave you exhausted. Dance the night away with music from the legends who shook a generation including The Beatles,The Rolling Stones, The Who, The Beach Boys, The Byrds, The Doors, The Mamas & The Papas, Dusty Springfield, Burt Bacharach, Elvis Presley, Bob Dylan, Aretha Franklin, James Brown Marvin Gaye, Stevie Wonder, The Supremes and many more.

With celebrity contributions on screen, footage from the era and a host of other visual delights, the show celebrates everything there is to love about the 60’s. The 60’s are back with a bang! 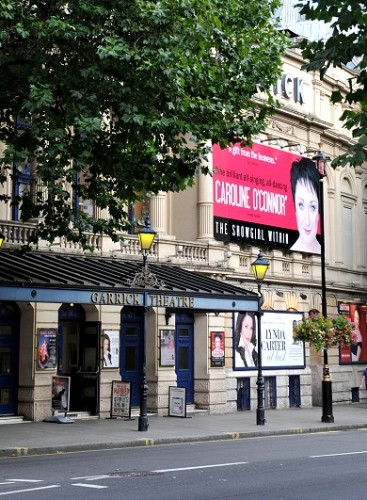 The Garrick Theatre was designed by Walter Emden, together with C J Phipps as a consultant to help with the planning on this site which included an underground river.

The theatre was built for W S Gilbert, who was responsible for the book and lyrics of all Savoy Operas with Sir Arthur Sullivan, opening on 24th April, 1889 and named after David Garrick, an 18th Century actor, and still to this day retaining its Victorian aspects. In 1889 Sir John Hare produced and starred in The Profligate with Johnston Forbes Robertson and Lewis Waller.

The theatre had 800 seats on four levels, when first built, but since then the gallery has been closed and the seating capacity reduced to 656. Also, the gold leaf auditorium was restored in 1986 by the designer Carl Toms and in 1997 the front facade also had a facelift.

In recent years, the theatre has largely been associated with comedies or comedy-dramas.

Recent productions include a No Sex Please We’re British, which transferred to the Duchess Theatre in August 1986. Notably, since then, on 24th October 1995 the Royal National Theatre’s multi-award winning production of J B Priestley’s An Inspector Calls opened at the theatre, having played successful seasons at the RNT’s Lyttelton and Olivier theatres as well as the Aldwych theatre, as well as a season on Broadway.