The Dominion Theatre
The building was constructed in 1928 and subsequently converted into a cinema in the 1930s.
According to Richard Mander and Joe Mitchenson’s book ‘The Theatres of London’ (1975), this was at one time the site for the St Giles’ Leper Hospital, which was founded in 1101 by Matilda Queen of Henry I. In the year 1764 a brewery was on the site, and then in 1809 Henry Meux took over the brewery, and it was renamed Meux’s Brewery.

Constructed and designed by the architects William and T R Milburn, the auditorium and stage were on a site previously occupied by Meux’s brewery.

On 3rd October 1929 the theatre opened with an American musical comedy based on golf, called Follow Through, by De Sylvia Brown and Henderson. Followed by the musical Silver Wings, neither of which was very successful.

Opening in 1931 was City Lights which was premiered by Charlie Chaplin at the theatre, without any dialogue but with music and sound effects, with Chaplin also making an appearance in front of the audience which contained some of the eras biggest stars (including playwright George Bernard-Shaw. Subsequent live shows followed but in April 1932 a receiver was appointed with a compulsory winding-up order being served on 30th May 1932. 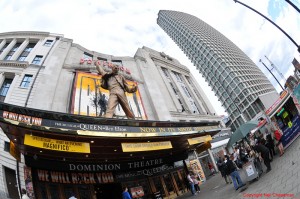 During the 1980s the Dominion was home to the musical Time, which necessitated stripping and reconstructing the theatre to accommodate the show’s ground-breaking effects.

From the early 1990s the venue has played host to a number of shows including Jesus Christ Superstar, David Ian and Paul Nicholas’ production of Grease, Scrooge: The Musical, Swan Lake, Disney’s Beauty and the Beast, a second run of Grease, and Notre Dame de Paris.

In 2002, the musical We Will Rock You, created by Queen guitarist Brian May and British comedian Ben Elton opened. During October 2006 the show was due to close before starting a UK tour, however due to popular demand the show has gone on for many years, and finally closing on 31st May 2014.

Directed by Christopher Renshaw and choreographed by Arlene Phillips, the original West End production opened at the Dominion Theatre on 14 May 2002, with Tony Vincent, Hannah Jane Fox, Sharon D. Clarke and Kerry Ellis in principal roles.