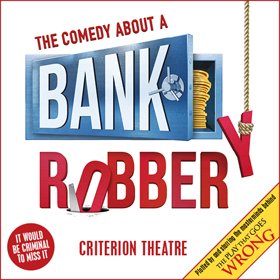 One giant diamond.
Eight incompetent crooks.
And a security guard asleep on the job.
What could possibly go right?

Written by and starring the Mischief Theatre Company who brought you the 2015 Olivier award-winning Best New Comedy “The Play That Goes Wrong” and “Peter Pan Goes Wrong”, book now, to be entertained by their unique brand of humour in this hilarious new show.

It would be criminal to miss it.

Criterion Theatre Piccadilly Circus London SW1Y 4XA
In 1870 following the acquisition of the site of the 17th century White Bear Inn, which was located on sloping ground stretching between Jermyn Street and Piccadilly Circus. Thomas Verity was then commissioned by Caterers Spiers to design a development which would consist of a restaurant, dining rooms, ballroom, and galleried concert hall.

Having started construction work it was decided to alter the proposed concert hall, (although keeping the composers’ names which still line the tiled staircases as of today), to a theatre which opened on 21st March, 1874.

The opening productions were An American Lady, performed and written by the manager Henry J Byron, together with a piece by W.S. Gilbert titled Topseyturveydom. 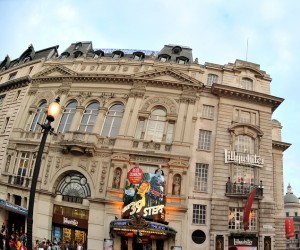 Under the management of Charles Wyndham, The Criterion made a name for itself as the leading comedy house in London. Between the period 1920 to 1940 productions included Musical Chairs with John Gielgud, and then in 1936 a three year run of French Without Tears which laid the foundation for the career of Terence Rattigan.

During the Second World War the BBC took over The Criterion. As an underground theatre it was suitable for light entertainment both live and recorded. After the war, followed productions such as Beckett’s Waiting for Godot and pieces by Anouilh, Dario Fo, as well as others.

In the 1970’s the Criterion Theatre site was proposed for redevelopment, which caused significant public demonstration as people feared the theatre would be gone forever. During the 1970s and early 1980s the Equity Save London’s Theatre Committee organised demonstrations. Well-known campaigners from the world of stage included John Gielgud, Diana Rigg, Robert Morley, Edward Woodward and Prunella Scales. 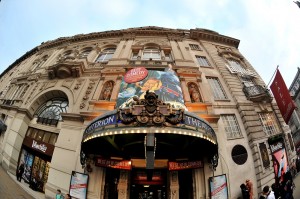 Eventually, the theatre’s future was secured, although subsequently the theatre closed for three years from 1989, until reopening in October 1992 while the Criterion block that stands today, was constructed around it. With significant refurbishment both backstage, and in the front of house, The Criterion Theatre has retained an almost perfectly preserved Victorian auditorium.

During the period from 1996 to 2005 The Reduced Shakespeare Company entertained audiences with their 30+ snippets from Shakespeare, with one performance being performed backwards! The Criterion Theatre retains its Victorian auditorium which ensures the theatre retains an intimate and atmospheric presence for those on stage as well as in the auditorium.