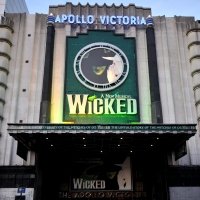 Nothing can distract the audience from the overall standard of the show however. Wicked is a fantastic, entertaining night out that can be enjoyed time and time again. The creatives behind the show have produced a spectacular piece of theatre that should, and will, be around for many years to come. Review of Wicked

The theatre is a Grade 2 Listed Building with a seating capacity of about 2304. The theatre was built as a ‘super-cinema’ and originally called the New Victoria Cinema when it opened on 15th October, 1930 showing the film ‘Old English’ and a stage show called ‘Hoop-La’.

This fabulous art deco cinema was designed, along with all super-cinemas around that time, with facilities for stage shows that would precede cinema films. Provincial Cinematograph (PCT) invited Ernest Walmsley Lewis to input plans to build the cinema close to Victoria Station.

With two frontages along busy roads, it has been said that taxi drivers once called the theatre ‘Sing-Sing’. From the time of its opening the theatre has experienced a number of highs and lows. The theatre is now one of the leading West End theatres and has hosted many top shows including Petula Clark in The Sound of Music, and Richard Harris starring in Camelot, and Fiddler on The Roof with Topol. 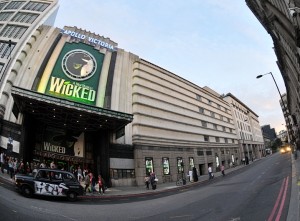 In 1984 the theatre hosted Andrew Lloyd Webber’s Starlight Express, a show which required significant building work to be done to the auditorium due to the show’s special effects. There then followed eighteen brilliant and successful years, with the show concluding on 12th January 2002.

Since that time the Apollo Victoria has undergone quite a lot of restoration, now returning it to its previous glory. Bombay Dreams opened on June 19th following previews from 31st May, 2002. This show ran until June 2004, when it transferred to the USA. Three weeks later, Saturday Night Fever moved in to thrill the West End with its 70s style music, running until 18th February, 2006.

Additional restoration work has continued until Wicked, The Untold Story of The Witches of Oz opened in September 2006 and is still performing to thrilled packed houses.

Now seen in the theatre, are the bright emerald green coloured iron railings, together with the black and silver-channelled foyer walls which have been restored to their former state, together with the ceiling which is back to its dazzling silver ornate prisms. Wicked has its Opening night on Wednesday 27th September 2006, with previews from Thursday 7th September 2006, and is still running.