Inspired by a true story, Everybody’s Talking About Jamie is the new hit musical for today.

Jamie New is sixteen and lives on a council estate in Sheffield. Jamie doesn’t quite fit in.
Jamie is terrified about the future. He is going to be a sensation.

Supported by his brilliant loving mum and surrounded by his friends, Jamie overcomes prejudice, beats the bullies and steps out of the darkness, into the spotlight.

John McCrea, Rebecca McKinnis, Tamsin Carroll, Shobna Gulati, Lucie Shorthouse and Lee Ross lead a twenty-four strong company and an eight-piece band that will ‘sweep you away on a tide of mischief, warmth and exuberance’ (Financial Times).

With ‘songs that have the wow factor’ (The Times) by lead singer-songwriter of The Feeling, Dan Gillespie Sells, and ‘hilarious’ book and lyrics ‘with delightful punch’ (Whatsonstage), by writer Tom MacRae, this funny, fabulous, feel-good, musical sensation has been wowing audiences and critics alike.

Michelle Visage will be joining the cast from 18th October 2018. Due to Michelle Visage’s filming commitments as a judge on Ireland’s Got Talent 2018, she will not be performing between Tuesday 20 – Thursday 29 November 2018.

*******
The Apollo Theatre was opened one month after Queen Victoria had died in 1901 making it the first West End theatre of the Edwardian age. The auditorium was significantly refurbished in 1932. It has been commented that the balcony is the steepest in London so be warned!

The Apollo Theatre usually featured musical comedies in its early days. The theatre became the home of Harry Gabriel Pelissier’s The Follies from 1908 to 1912. From the 1930s it specialized in light-comedies, farces and thrillers. Marc Camoletti’s Boeing Boeing opened in 1962 before transferring to the Duchess Theatre in 1965 where it ran for a total of Two thousand and thirty five performances. 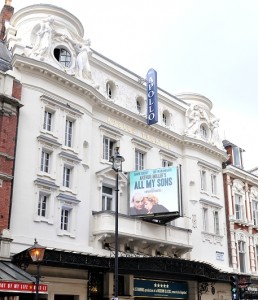 Camoletti’s Don’t Dress For Dinner opened on 26th March, 1991 before also transferring to the Duchess Theatre on 26th October, 1992 running through to March 1997

The production of The Curious Incident of the Dog in the Night-Time was at the theatre until December 2013, when the roof collapsed. The show has now transferred.