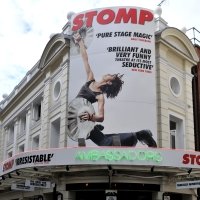 Review of STOMP
“That’s the one where they bang brooms on dustbins isn’t it”, is the usual response when Stomp is brought up in polite conversation. “How do they make a whole show out of it” usually follows, a sentiment shared by my mother who turns to me every West End Live and says “I enjoyed it but I don’t know if I could watch it for ninety minutes.” I agreed. Read the full review

The Ambassadors Theatre is a relatively small theatre compared to many other West End theatres, with a similarly small stage, with the depth of the stage only 6.25 metres. The auditorium has a proscenium arched stage suiting revue styles of productions.

The Ambassadors and the nearby St Martin’s Theatre were thought of as companions by their architect WGR Sprague in 1913, however, St Martin’s was delayed by three years. There followed a name changed when the theatre changed its name to The New Ambassadors Theatre in 1999 but on Wednesday, 4th April 2007 it was renamed The Ambassadors Theatre again. The Ambassadors is probably best known as being the original home of the Agatha Christie thriller The Mousetrap which opened here on 25th November 1952, and then stayed until 25th March 1974 before moving the short distance to St Martin’s. 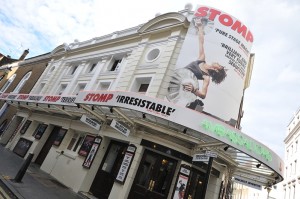 Notable productions after this include 84 Charing Cross Road and a transfer of The Royal Shakespeare Company’s production of Christopher Hampton’s play Les Liaisons Dangereuses. More recent productions have included revivals of The Killing of Sister George (with Miriam Margolyes) and Dames at Sea (with Kim Criswell, Peter Duncan and Sara Crowe). The theatre was used by The Royal Court Theatre between 1996 and 1999 to stage their ‘Theatre Upstairs’ studio-based work, during which time their own theatre in Sloane Square was being refurbished.