In its early years, the theatre was primarily known for melodrama, and these were called Adelphi Screamers. A considerable number of Charles Dickens stories were adapted for the stage and performed at the theatre, which included John Baldwin Buckstone’s The Christening, which was a comic burletta, and had its opening night on 13th October, 1834. Based on The Bloomsbury Christening, this is regarded as the first Dickens adaptation performed.

Subsequent classics included popular ones such as; The Old Curiosity Shop, Pickwick Papers and Nicholas Nickleby. With significant improvements to the building required, the theatre was demolished, and on (Boxing Day) on 26th December 1858 The New Adelphi was opened. The re-built theatre had a seating capacity of 1,500, with standing room for a further 500. The interior was lit by a Stroud’s Patent Sun Lamp, which had a brilliant array of gas mantles passing light through a chandelier of cut-glass.

During the mid-nineteenth century, John Lawrence Toole established and heightened his reputation for comedies at the theatre. Also at this time, the Adelphi was host to a number of French operettas including La belle H’l’n. In 1867, the theatre was home to the first public performance of Cox and Box, the Arthur Sullivan opera. William Terriss, an actor who performed frequently at the Adelphi was stabbed to death on 16th December, 1897 and this is commemorated by a plaque on the wall close to the stage-door. A bit-part actor known as Richard Archer Prince, and also with the name of William Archer Flint, committed the murder of Terriss. It is alleged that the theatre is haunted by the ghost of Terriss. Terriss’ daughter Ellaline Terriss, a well-known actress, and her husband actor Seymour Hicks managed the Adelphi for several years at the close of the 19th century. 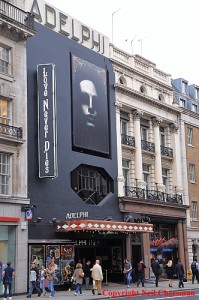 The theatre re-opened as the Century Theatre on 11th September 1901 with the name reverting to the Adelphi in 1904. The new theatre was constructed by Frank Kirk and designed by Ernest Runtz. The ‘dean of London musical theatre’, George Edwardes, took control of the theatre in 1908. In the early 20th century, the Adelphi housed a number of musical comedies. The current Adelphi Theatre opened on 3rd December, 1930, re-designed by Ernest Schaufelberg in Art Deco style, and named the ‘Royal Adelphi Theatre’ and re-opened with the musical Ever Green, by Hart and Rogers. In 1940 the theatre’s name reverted to The Adelphi, continuing to be home to comedy and musicals.

A proposed redevelopment of Covent Garden by the Greater London Council in 1968 saw the theatre under threat, together with the Vaudeville, Garrick, Lyceum and Duchess theatres. A successful campaign by Equity, the Musicians’ Union, together with theatre owners under the banner of ‘Save London Theatres Campaign’, led to the scheme being abandoned. In 1993, Sir Andrew Lloyd Webber’s Really Useful Group purchased the theatre and entirely refurbished it prior to the opening of Lloyd Webber’s adaptation of Sunset Boulevard.

In November 1997, the Adelphi became home to Chicago which became the theatre’s longest-running production during its 8 1/2 year run, which at the time, also made it the longest-running American musical in the history of the West End. In April 2006, Chicago transferred to the Cambridge Theatre. Since then, the Adelphi Theatre has hosted major shows including Joseph and The Amazing Technicolor Dreamcoat, Evita, Love Never Dies, The Bodyguard, and in 2014 Made In Dagenham The Musical.