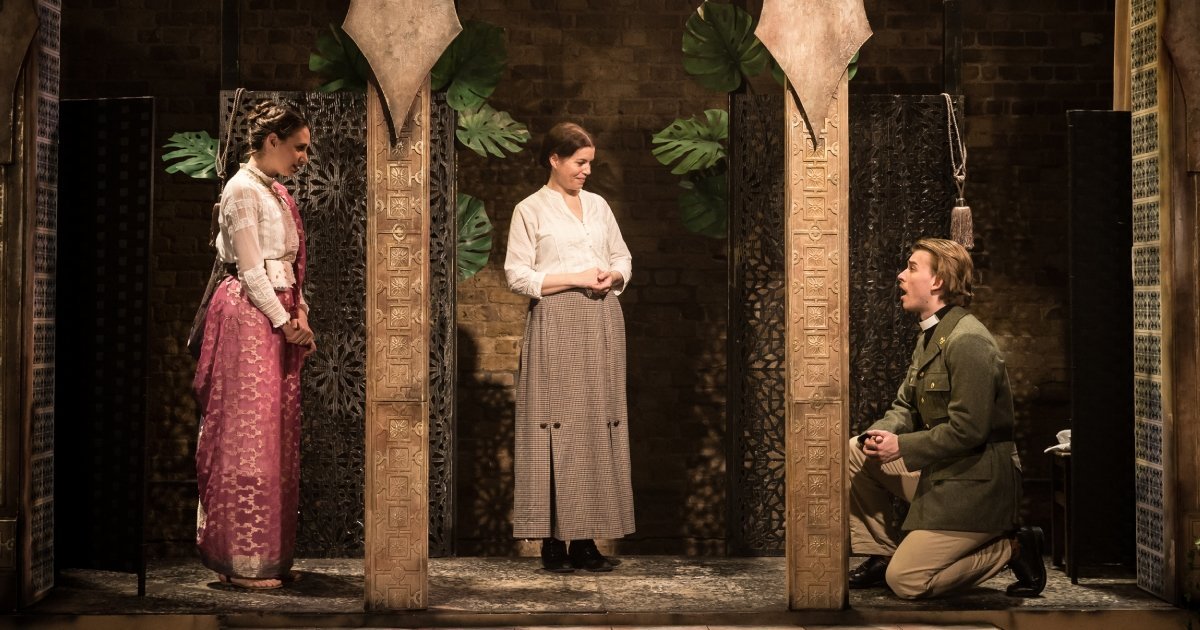 To mark the centenary of the Amritsar massacre (1919) director Phil Willmott has set Othello (1601) somewhere in India. For a British audience familiar with A Passage to India (1924) or The Raj Quartet (1975) or indeed the film Gandhi (1982) this works. We can more readily get to grips with racial, social and gender dynamics. Othello (Matthew Wade) is here a conflicted collaborator in British rule. A general in the Indian army who has “done the state some service” he is simultaneously part of the elite and also despised for his colour and religion. He and Desdemona (Carlotta De Gregori) whose skin is a white as alabaster have fallen in love and secretly married. This cross-racial marriage meets with consternation and disbelief.

This production is driven relentlessly forward by Rikki Lawton’s Iago. A pocket battleship of demonic energy, cunning and Machiavellian scheming Rikki brings Iago vividly to life. He toys with and manipulates those around him with effortless ease. He can spot and exploit vulnerability at will. Rikki is terrific in the way he drops hints to Othello about Desdemona but then backtracks saying ‘oh it’s nothing‘, knowing full well that this will goad Othello. Like a skilled angler, he first hooks Othello and then slowly but relentlessly reels him in. Rikki has a wonderful repertoire of ticks, tricks and traits to convey Iago’s diabolical strategies. Like a boxer, he continually touches his nose, holds his head in his hands, makes the groin-thrusting gesture to indicate sex, slaps people on the back, cries crocodile tears to feign concern and insists all the while that he is acting out of love for Othello. Rikki really gets inside Iago and as a result, we get to understand Iago more fully and more shockingly. Although this production gives a social context for Iago. He is a member of the servant class and resents the promotion of Cassio (Jerome Dowling) above himself and hates Othello. But as Rikki so brilliantly shows in the final scene Iago has no motive as such. “Demand me nothing, what you know, you know, from this time forth I never will speak word.” Rikki here makes the zipped lips gesture to reinforce the point. This is a brilliant interpretation of Iago fresh, original and compelling.

This show boasts a very strong cast. Claire Lloyd as Iago’s wife Emilia is convincing, especially in the handkerchief scene. It is she who exposes Iago as a liar. Jerome Dowling as Cassio manages to suggest that he might well be having an affair “Betrayal” like with his best friend’s wife. A comparison of Pinter’s Betrayal and Willmott’s Othello would be fascinating in this regard. Carlotta De Gregori’s Desdemona is superb. Like an angel dressed all in white she has the grace and sensitivity of a pure creature untainted by worldly concerns. She is captivating in her scenes with Othello and we are in doubt that her love is unconditional and profound. And yet in her scenes with Cassio she does just enough to suggest that something might be going on. Her performance in the final scene is moving and poignant. Matthew Wade is spot on as he morphs from successful general to besotted lover, to vulnerable doubter, to jealous murderer and then back to an inconsolable lover. It’s a tall order but Matthew passes every test with flying colours. Fittingly he is reunited with his love and dies upon a kiss.

Our production presumes that English army chaplain, Cassio and the Indian officer recruit, Othello, survived their Sandhurst training together, becoming friends, during which time they first met the wilful and beautiful débutante, Desdemona.

Upon graduation, Othello has been fast-tracked to the rank of General in an Indian outpost, now under the jurisdiction of Desdemona’s father, The Duke. She and Othello secretly marry and he sends for his old friend, Cassio, to be his Lieutenant.

Iago, Othello’s sociopathic English orderly (a lower-class soldier assigned to commissioned officers as a personal servant) is prevented from rising any higher in the army by his background and is deeply resentful of Othello for his favouring of Cassio.

With the reluctant participation of his newly arrived wife, Emilia, Iago plots the destruction of the General, who is already isolated and conflicted by his role collaborating in and enforcing the British occupancy of his native land.