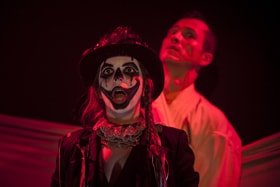 Edgar Allan Poe is one of those writers that everyone has heard of but not everyone has read. My first encounter with his works as reading “The Tell-Tale Heart” back when I was a child. The nightmares I suffered after reading it, meant I have steered away from Edgar and his works since then. However, I am a big boy now so went along to the Brockley Jack where The Okai Collier Company are presenting a double bill of his work – The Masque of The Red Death and The Fall of The House of Usher.

The Masque of The Red Death, adapted by Simon James Collier and directed by Omar F. Okai, is the story of a horrible plague ravishing the land. The cruel Prince Prospero invites various high-born friends into his remote fortified abbey to escape the plaque. There is intrigue aplenty within the abbey and Prospero is always at the centre controlling his guests and ensuring his own survival – even delving into beliefs that would offend and disgust right-minded individuals. One night, Prospero holds a masqued ball to entertain his guests but is shocked when someone sneaks in dressed in red. After confronting the mysterious guest, Prospero is forced to face his own mortality.

The Fall of The House of Usher, adapted by Adam Dechanel and directed by Maud Madlyn, is a mystery story that centres around the Usher family. A gentleman by the name of Winthrop has arrived at the house in search of his fiancee, Madeline who had abandoned him at the altar to fly home to her brother Roderick. Roderick tries everything to persuade the young man to forget Madeline who, so Roderick claims, is ill – cursed, as all members of the family have been. Will Winthrop be able to break the Usher family curse and rescue his bride or will he, having entered the building, succumb to the same fate as the Usher family?

Two very haunting stories told in a very interesting way. The seven actors (Anna Larkin, Bethan Maddocks, Cristinel Hogas, Harriet Main, James McClelland, Nell Hardy and Zachary Elliott-Hatton) perform in both plays which must be hard work for them to switch roles like this. But they do it with aplomb, and all of the characters are nicely portrayed. If I’m honest, I preferred The Masque of The Red Death to The Fall of The House of Usher both in regards of story and production. Cristinel Hogas was extremely effective as Prince Prospero in The Masque of The Red Death and I really liked the way the story progressed with the different coloured rooms – nice lighting design by Ben Jacobs – and the final scene was nicely done with a lot being left to the imagination.

The Fall of The House of Usher on the other hand, didn’t fully engage me at all I’m afraid. Whilst the presentation was OK, it just felt very slow compared to the first show. The use of the ghosts spirits – Anna Larkin, Harriet Main and Cristinel Hogas – was well done, especially when tormenting Winthrop (James McClelland), but I ended up with no sympathy for the Usher family at all.

I think it was an interesting idea to do the two productions together – split with an interval – and, on the whole, it worked pretty well. Although I definitely preferred one play over the other, both of them were nicely put on. The adaptations seemed to be good – though I would have liked more information on the Usher’s especially as Lord Usher appeared in the first play, leaving me unsure if the two stories were definitely connected or not. Overall then this Edgar Allan Poe Double Bill was an interesting evening of old-fashioned theatrical entertainment.

The Masque of the Red Death
adapted by Simon James Collier
directed by Omar F. Okai
In his remote and fortified abbey, the notorious Prince Prospero and a handful of selected cronies have taken refuge to wait out the end of the Red Death, a gruesome plague which has swept over the land. But as the revelry continues a mysterious figure appears, and the Prince is forced to confront his own mortality.

The Fall of the House of Usher
adapted by Adam Dechanel
directed by Maud Madlyn
Those that enter the House of Usher never leave.
One man, determined to rescue his captive bride-to-be, is pitted against the centuries old curse cast upon the house. Can he rescue his love before it’s too late?
From the twice nominated ‘Empty Space…Peter Brook Award’ Okai Collier Company comes this haunting double-bill from the master of gothic story-telling: Edgar Allan Poe.

Founded in 1994 by Artistic Director Omar F. Okai and Writer/Producer/Director Simon James Collier, the award-winning Okai Collier Company and its subsidiaries has over 100 productions to its credit and works towards breaking down contemporary social barriers and encouraging new talent by developing a range of projects. 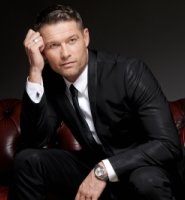 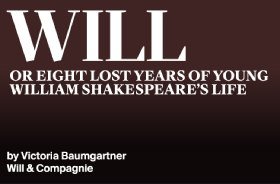 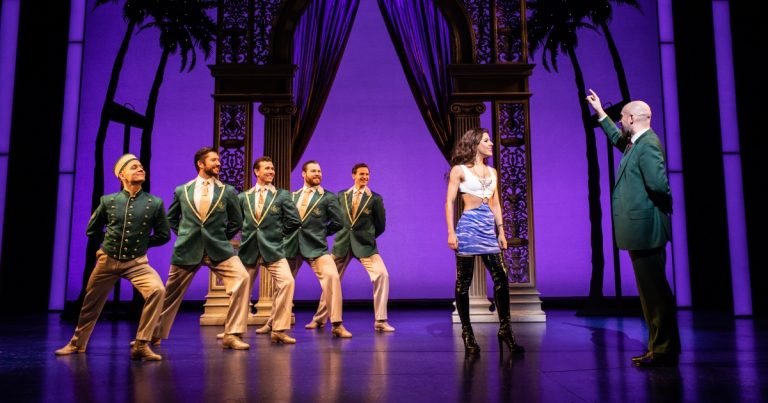