Shakespeare’s plays are very flexible. They can be set in pretty much any time and location and they will still on the whole work. Other writers are not so lucky and are really fixed in time and space. Agatha Christie and Oscar Wilde are two authors that come to mind in this instance. And this theory of mine was borne out with a visit to the Brockley Jack Studio to see The Importance of Being Earnest.

It’s nearly time for tea and butler Lane (Daniel Desiano-Plummer) is setting out the cucumber sandwiches and bread & butter. His master Algernon Moncrieff (Daniel Hall) is expecting guests for tea and wants everything to be perfect. Unfortunately, before they arrive, Algernon gets a visit from his good friend Earnest Worthing (Riley Jones). Normally a welcome distraction in Algernon’s life, Earnest could not have arrived at a worse time as Algy’s guests are his aunt Lady Bracknell (Harriet Earle) and her daughter Gwendolen Fairfax (Sophie Mercell). However, he welcomes his friend, like a well-bred gentleman, should and the two of them banter together over a cigarette case bearing a surprisingly familiar inscription from someone called Cecily (Emily-Rose Clarkson), As Algy probes Earnest over the case, he learns his friend’s deeply held secret and, reveals one of his own. However, their discussion is cut short with the arrival of Algy’s guests. Earnest is in love with Gwendoline but Lady Bracknell does not particularly see him as husband material – especially when she finds out his origins. So, is Earnest going to have his love thwarted and will Algy be a bachelor forever or will the intervention of a Governess and a curate change the lives of all concerned?

The Importance of Being Earnest is probably one of the most remembered of Wilde’s plays. Not only for a couple of very famous lines but also because when it was first performed, various events occurred which culminated in Oscar spending some time as a guest of Her Majesty. However, that doesn’t take away from the story itself which is a lovely reflection of the morals and rules of society in Victorian England. One of the good things in the script is that it never really judges society but allows the audience to form their own views of how our ‘betters’ behaved in those days. The story itself is easy to follow and this production has maintained all the elements nicely, even adding some rather nice musical interludes for the butler Lane to sing.

Character-wise, my favourite was Harriet Earle as Lady Bracknell. Immediately dominating the stage, Harriet moves in a stately way with through the story. Never losing her temper or changing the pace and timbre of her voice, but – particularly with her eyes – always ensuring everyone is aware of her feelings on a subject. She reminded me, rather scarily, of a teacher I used to have who could quell any attempt at rowdiness with a mere glance. Other performances were equally as good and the scene where Gwendolen and Cecily face off over the tea table was superbly played by Sophie and Emily-Rose raising a lot of laughs from the appreciative audience. I’m also going to mention Daniel Desiano-Plummer as the butler Lane. Daniel has the perfect demeanour to be a butler but plays the role with a wonderful twinkle in his eye, suggesting that of all the protagonists, he is the only one that sees through all the frippery of social convention to the people behind the mask. He also has a really sweet singing voice that adds a lovely touch to the whole production.

I quite liked the set – mainly a black and white ‘cartoonish’ backdrop with a huge calling card at the back – which was a counterpoint to the colour and frippery of the language and very good, era-specific costumes.

Overall, this production of The Importance of Being Earnest was very well presented. As a play, it is definitely of its time, but as a nice way to spend a couple of hours after the working day is over, it comes highly recommended.

In matters of grave importance, style, not sincerity, is the vital thing.
John Worthing and Algernon Moncrieff are dissatisfied with their tediously mundane lives. To escape the burden of social obligation they attempt to win the hearts of two women who claim to only love men called Ernest. Both men create alter ego’s and become tangled in a web of mishap and misadventure.

The Importance of Being Earnest is a playful and amusing story of romance, secret identities and cucumber sandwiches. Often referred to as ‘A Trivial Comedy for Serious People’, Wilde’s most famous and successful play is one of the greatest comedies every written. 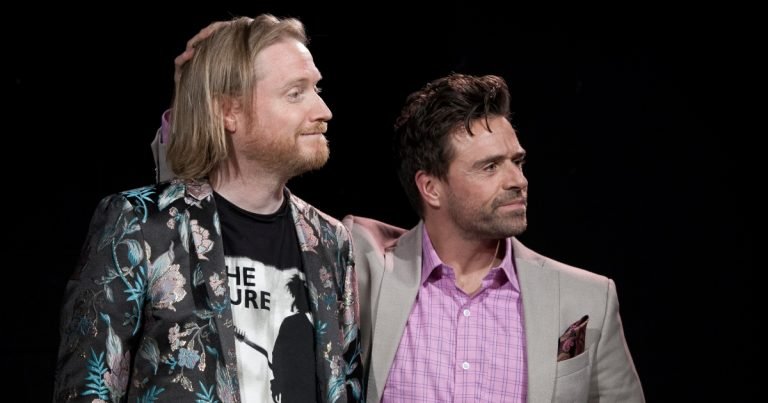