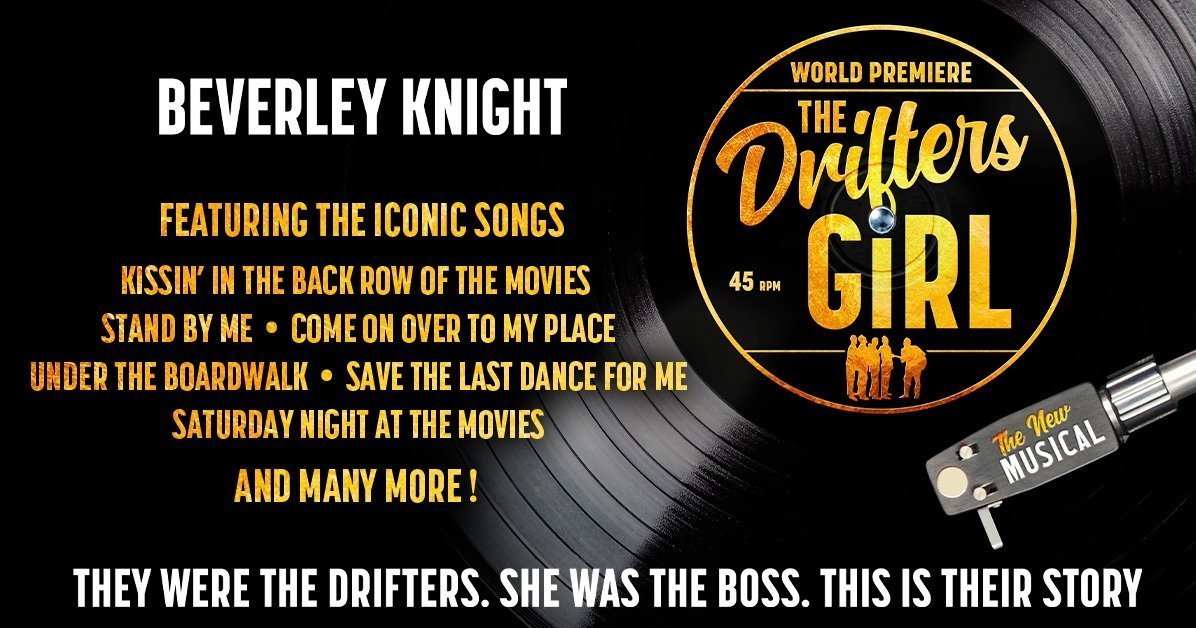 THEY WERE THE DRIFTERS. SHE WAS THE BOSS. THIS IS THEIR STORY.

The Queen of British Soul and West End leading lady BEVERLEY KNIGHT stars in the world premiere of a brand new musical – THE DRIFTERS GIRL.

Coming to the West End Autumn 2020, discover the remarkable story of THE DRIFTERS, one of the world’s greatest vocal groups, and the truth about the woman who made them.

BEVERLEY KNIGHT stars as Faye Treadwell, the legendary manager of THE DRIFTERS, who, alongside her husband, fought for three decades to turn Atlantic Records’ hottest vocal group into a global phenomenon. From the highs of hit records and sell out tours to the lows of legal battles and personal tragedy, THE DRIFTERS GIRL charts the trailblazing efforts of the world’s first African American, female music manager and how she refused to ever give up on the group she loved. Thirty years, and hundreds of hit songs later, there is no doubt that Faye Treadwell was and always will be, The Drifters Girl.

With an unbelievable soundtrack of some of the most iconic songs in history, including SAVE THE LAST DANCE FOR ME, UNDER THE BOARDWALK, KISSIN’ IN THE BACK ROW OF THE MOVIES, STAND BY ME, COME ON OVER TO MY PLACE and SATURDAY NIGHT AT THE MOVIES, THE DRIFTERS GIRL is one musical you will never forget.

Beverley Knight is the Queen of British Soul. She has enjoyed several Top 10 Albums, including the platinum selling Voice: The Best Of Beverley Knight. Her most recent solo album Soulsville was released in June 2016 and went straight into the UK Top 10. She was awarded an MBE by the Queen in 2007 for services to British music and charity, has won three MOBO Awards, and been nominated for Best Female at the Brit Awards three times and for the prestigious Mercury Music Prize. 2019 sees her celebrating 25 years in the music business with a live album, ‘BK25’, recorded with the Leo Green Orchestra at the Royal Festival Hall, out November 8th on Warner Music.

Beverley has also made several, highly acclaimed performances in the West End. Her debut in London was in the star role of Rachel Marron in The Bodyguard in 2013. In 2014 she received an Olivier Award Nomination as Best Actress in a Musical for her much praised role of Felicia Farrell in the Tony Award winning hit show Memphis The Musical, and in 2015 she played the iconic role of Grizabella in Cats at The London Palladium. In 2018 she starred as Emmeline Pankhurst in much praised new funk and hip hop musical Sylvia at The Old Vic, for which she won a best supporting actress award at the inaugural Black British Theatre Awards.

The Drifters Girl, with a book by Ed Curtis, will be directed by Jonathan Church, designed by Anthony Ward, choreography by Karen Bruce, lighting design by Ben Cracknell and music supervision and orchestrations by Chris Egan.

Further casting and full creative team will be announced at a later date.

The Drifters Girl is produced by Michael Harrison and David Ian.