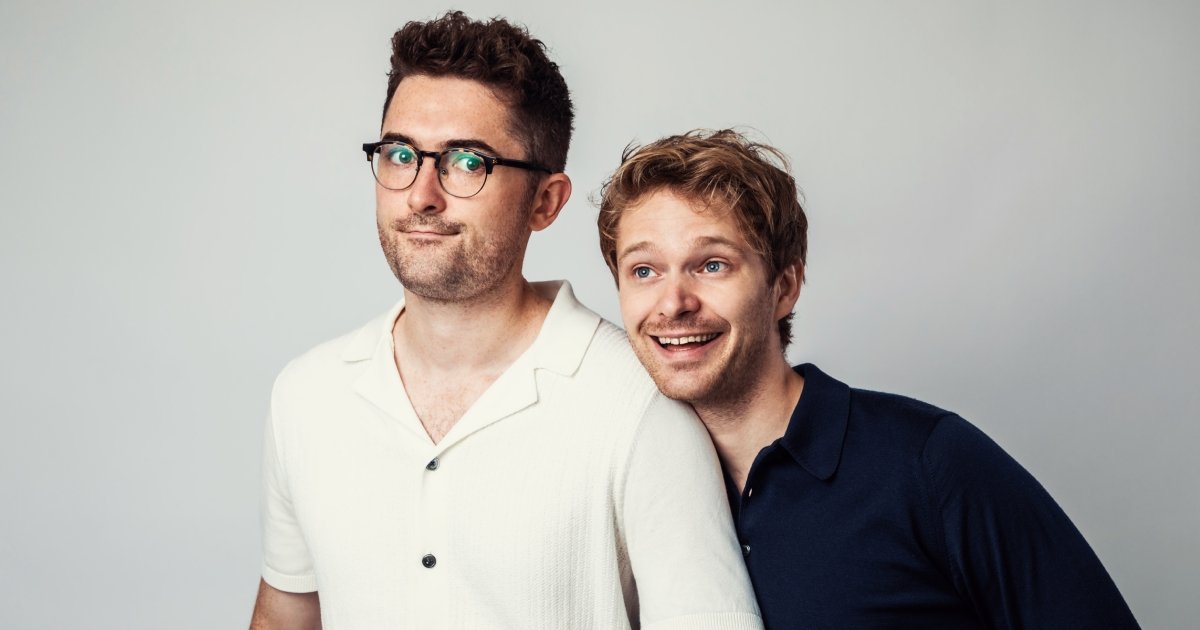 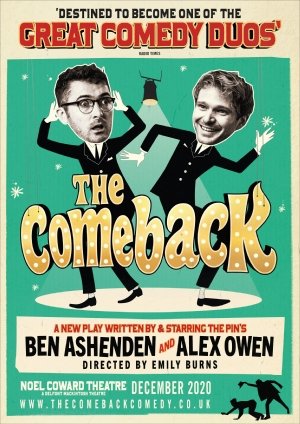 The Comeback, a brilliantly original and hilarious new comedy, is set to delight all generations at the Noel Coward Theatre this December. This debut play from The Pin’s award-winning Ben Ashenden and Alex Owen – ‘destined to become one of the great comedy duos’ (Radio Times) – tells the story of two double acts fighting to wrest control of the most chaotic, farcical and high-stakes gig of their respective careers. Directed by Emily Burns, The Comeback will have audiences doubled over laughing and wiping a tear away at the end with its heart-warming exploration of bittersweet nostalgia and the enduring power of friendship. This show is a much-needed dose of feel-good, dizzying escapism with real emotional heart, and a celebrity guest each night to boot.

Up-and-coming comics Alex and Ben have been booked in the warm-up spot for a beloved but fading double act’s comeback tour. Neither duo are delighted to be playing to a sparse crowd in a sleepy, seaside town, but when it’s revealed that a Hollywood director is in the audience, both acts glimpse a final chance for their big break. Cue sabotage, mistaken identity and full-on farcical mayhem, as the performance descends into a desperate battle for the limelight. With the action alternating between offstage and on, and the tone between Noises Off and Morecambe and Wise’s old-school charm, this is a warm-hearted, joyful, and dazzlingly funny new comedy.

Each night Ashenden and Owen will be joined on stage by a surprise celebrity guest star playing a cameo role in the production. Details to be confirmed at a late date.

Ben Ashenden and Alex Owen said: “After 8 years of lugging props between tiny venues, and 8 months of watching those props gather dust, we feel ridiculously excited and fortunate to be bringing a play to the West End. For it to have been developed with and presented by a producer of Sonia Friedman’s immense standing makes us very proud, and provides ample material for anxiety dreams in which hidden cameras are revealed and words like “prank” shouted. We hope to provide 90 minutes of silliness, escapism, and extremely well-dusted props.”

Sonia Friedman said: “I am absolutely thrilled to be announcing The Comeback as SFP’s return to the West End. I was excited about The Pin’s debut play long before lockdown, but after the year we’ve had, it feels like the perfect tonic. More than ever, we need the laughter and emotional connection of communal experience – and frankly, nothing provides that like live theatre. The Comeback delivers all that and much more.

It’s so heartening to see artists and audiences in theatres once again this Christmas. As theatre makers – performers and producers alike – we have a duty to do our bit to lift the nation’s spirits and nourish its soul. Theatre plays a critical role in maintaining our collective mental health. That’s why, even while theatres were forced to close, artists looked at other outlets to make and share work, on and offline. It’s why now, despite the ultra-tight financial pressures social distancing entails and against all the odds, we’re doing all we can to get shows back on stages. Audiences need live entertainment as much as we need them.

Make no mistake, though: theatre is not back in business. Having shuttered 18 productions worldwide seven months ago, all of which remain suspended, I cannot fully – let alone profitably – re-open my shows. As well as government go-ahead (even just a date), we’re still waiting for an insurance scheme to protect our profession in the months ahead. Producing shows this Christmas is a tightrope act, but The Comeback will go ahead – following approved Performing Arts working guidelines – and so long as government restrictions allow.

Changed circumstances offer new opportunities – to introduce adventurous audiences to the most brilliant and inspiring new talent. That’s one of the best parts of my job, and The Pin are up there with the very best.

Following in the footsteps of Britain’s comedy greats – Morecambe and Wise, Fry and Laurie, French and Saunders – they are going to light up the West End with a combination of laugh-out-loud slapstick, self-aware silliness and witty wordplay in the most heart-warming story of two friends following their dreams. This genius comedy shows just how precious live performance is and, as British theatre begins to build itself back up, becoming a frontline of the national recovery, The Comeback couldn’t be more timely. Theatre isn’t just for Christmas. This is just the start.”

Tickets for the production which will run at the Noel Coward Theatre from December 8th – January 3rd and are now on sale.