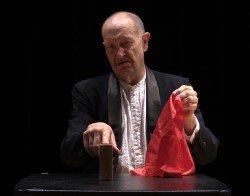 A Nazi prison. Solitary confinement. Insanity. Chess. If one were to list the bare bones of an outline to tickle interest, there would be few to compete with the intriguing outline of Stefan Zweig’s The Chess Player. Adapted by the star of this one-man show, Richard McElvain, a chilling contemporary relevance chimes in this urgent tale of survival amidst the direst of circumstances.

Set in 1942, the audience is thrust into the middle of a chess match aboard an American ocean liner heading for Buenos Aires. A young buck is playing the greatest player in the world. The intrepid challenger is on the verge of making a calamitous move when a whisper from a stranger advises otherwise. This man seems to read the game 6, 7 and 8 moves ahead. Who is he? After all, his advice culminates in a drawn game. Post-match, the man asks his volunteer counsel how he knows so much?

The gentleman in question, Dr B, a Jewish lawyer, delves reluctantly into his past. A past defined by his imprisonment at the hands of the Nazis, convinced as they were that he held vital information. Concentration camp would not be his destination, but an excellent ‘hotel room’ instead. During an agonising period, lasting months, his mind unravelled. The monotony, solitude and isolation picked at his sanity. One day, Dr B managed to procure and smuggle a book into his quarters. It was a tome on chess. The rest, as they say, was history and so he now finds himself aboard said ship with a game awaiting him personally.

Zweig’s text looks at the power of a silent space to send the mind into spasms of delirium. It also looks at the consequence of trauma and the resilience of the human spirit, as well as the innate will to survive. As Neil Young once sang, ‘the same thing that makes you live, can kill you in the end’, and that observation is true for Dr B, as his willing, insistent fragmentation of his psyche in order to divide and conquer a puzzle is an essential, albeit
ultimately unhealthy, obsession in a landscape of nothingness.

There is much to admire in this production, but the delivery is slightly too restless for its own good. Lines of dialogue are not given adequate space to breathe in order to allow the consequences, rhythm and content of the work percolate in any way in the minds of the audience. If the journey of this play can, at times, test the patience, the denouement and conclusion is utterly wonderful, however, and the questions probed are nothing less than vital.

Furthermore, this is a captivating performance by the dextrous McElvain, who is truly exceptional; liberally sprinkling humour and, most impressively, brokering the fourth wall with insightful, articulate and pointed ruminations. He brings the historical text into the modern day with his incisive asides. In the process, he also deconstructs the production itself in an intelligent, meticulous fashion.

The Chess Player may be a few little tweaks here away from a resounding ‘checkmate’ but, as it stands, it is still well on the course to victory.

A battle rages inside prisoner’s mind as he struggles against insanity while held in solitary confinement in a Nazi jail. After stealing a book of chess matches, he divides his conscious self into two feuding chess masters. The Chess Player is a contemporary reimagining of a classic tale written by Jewish Austrian Stefan Zweig when he was escaping the horrors of Nazism. Award-winning US actor and director Richard McElvain’s interpretation of the story is all the more disturbing in a world where the Far Right is once again raising its head.