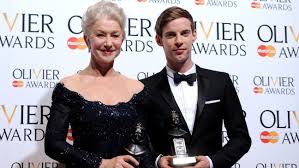 The Laurence Olivier Awards are the UK’s most prestigious award ceremony, acknowledging the outstanding achievements of the theatre industry in the last year. The 37th annual Awards returned to London for 2013 and was hosted by Downton Abbey actor Hugh Bonneville and West End star and former Olivier Award winner Sheridan Smith at the Royal Opera House on Sunday 28th April, in a star-studded event which was attended by some of the top names in the West End, along with an assortment of famous faces from from music, television and the big screen. The hugely popular free event at Covent Garden Piazza, first staged in 2012, also returned to allow the theatre-going public without a ticket to watch a live stream of the ceremony on big screens as the casts of shows such as Wicked, Burn The Floor and Some Like It Hip Hop entertained with live performances. West End leading man Michael Xavier and TV personality Claudia Winkleman hosted the BBC Radio 2 Stage.

Sheridan Smith opened the Awards in style performing ‘Diamonds Are A Girls Best Friend’ from Gentleman Prefer Blondes, dazzling in a sparkly silver dress and backed up by suit-wearing dancers. The cast of Olivier-nominated production Cabaret followed with the performance of a song from the musical led by Will Young, who was up for Best Actor in a Musical and looking very different from his first appearance on ITV as the eventual winner of Pop Idol. After that, Damian Lewis presented the first award of the evening to the Apollo’s Long Day’s Journey Into Night for Best Revival, which was collected on stage by the play’s producers with high praise for star David Suchet.

Eugene O’Neill’s masterpiece may have taken the first award, but it was The Curious Incident of the Dog in the Night-Time who ended up stealing the show by winning in seven of the eight categories they were nominated in. Nicola Walker earned the first of the night’s accolades with the Best Actress in a Supporting Role and the awards kept on rolling in after that. The critically-acclaimed play, which was originally presented at the Cottesloe, NT before transferring to the West End’s Apollo Theatre, took home Best New Play and was also recognised for the work of its cast and creative team, with awards for Best Set Design (Bunny Christie and Finn Ross), Best Lighting Design (Paule Constable), Best Sound Design (Ian Dickinson) and Best Director (Marianne Elliot). Luke Treadaway also beat off competition from James McAvoy and Rupert Everett to win Best Actor, looking shocked and confessing to being ‘speechless’ as he accepted his award onstage. The impressive result for Curious Incident sees it repeat the success of Matilda The Musical at last year’s Olivier Awards, which also won a record-setting seven awards.

Another of the night’s victors was The Audience, which saw cast members Richard McCabe and Helen Mirren win the awards for Best Supporting Actor in a Play and Best Actress respectively. Playing HRH The Queen has certainly paid off for Helen Mirren in respect of awards, as she now adds an Olivier to her growing collection of an Oscar, Bafta and Golden Globe, quipping that ‘The Queen won a BAFTA this year and now she’s got an Olivier. I think she’s going to be thrilled’.

In the musical theatre categories, the success stories were Sweeney Todd and Top Hat.  The Chichester Festival Theatre’s revival of Sweeney Todd, which ran at the Adelphi Theatre in summer 2012, previously cleaned up at the Whatsonstage.com Awards and has now won three Olivier Awards, which included Best Musical Revival and saw both its star performers triumph as Michael Ball and Imelda Staunton were named Best Actor and Best Actress in a Musical. Top Hat, which is currently still running at the Aldwych Theatre following its acclaimed UK tour, danced off with the award for Best New Musical, along with Best Theatre Choreographer (Bill Deamer) and Best Costume Design (Jon Morell).

Billy Elliot scooped the BBC Radio 2 Audience Award, presented by West End star Elaine Paige and Vicky Entwistle, who plays Madame Thernadier in last year’s winning musical Les Miserables. Celebrating its win in what is the only Olivier Award voted for by theatre audiences, Tade Biesinger gave an amazing live performance of ‘Electricity’ as the young Billy on the Covent Garden stage, much to the delight of the crowds present.

Choreographer and director Gillian Lynne and playwright Michael Frayn were the recipients of this year’s two Special Awards. Original Phantom Michael Crawford made a surprise appearance to present Lynne with her award, followed by a special honorary performance by the touring company of Cats to close the 2013 Olivier Awards.

There were some truly fantastic performances punctuating the presentation of the awards this year. Tim Minchin had the audience in tears with his performance of ‘My House’ from Matilda The Musical while The Bodyguard star Heather Headley brought the house down with her rendition of Whitney Houston’s power ballad ‘I Will Always Love You’. Singing legend Petula Clarke also appeared to perform Sunset Boulevard song ‘With One Look’, Michael Ball was phenomenal as ever as he sang the classic ‘Love Changes Everything’ and James Bourne had the Covent Garden audience going wild with his performance of ‘Holly I’m The One’ from Loserville. There were further performances from former Glee co-stars and Broadway sensations Matthew Morrison and Idina Menzel. Morrison staged a big West Side Story song-and-dance number, while Menzel was stunning singing ‘Don’t Rain On My Parade’ and gave a moving performance of ‘That’s How I Say Goodbye’ in tribute of the late composer Marvin Hamlisch. The West End company of A Chorus Line also gave an unforgettable performance, first showing a video of the cast leading a chorus line on their way to the Royal Opera House singing ‘God I Hope I Get It’, before bursting onto the stage in their full spangly glory to perform ‘One Singular Sensation’. The winners, host and presenters also provided some amusing moments, Lee Evans’ eating a chocolate Olivier statuette while presenting the award for Best Director being one of the more memorable.

Those who were unable to attend the Olivier Awards or the Covent Garden event in person were able to either follow the live broadcast on BBC Radio 2 or watch the highlights on ITV. This is the first time in ten years that the Olivier Awards have been shown on TV, in what is hopefully a move towards televising the full Awards ceremony in the future. Watching the ITV highlights, there was clearly room for improvement with many vital moments cut out and a strong emphasis on the American performers over our British ones. It was most definitely a step in the right direction however.

The full results of the 2013 Laurence Olivier Awards can be seen below, with the winners highlighted in each category:

Long Day’s Journey into Night at the Apollo

BEST ACTOR IN A SUPPORTING ROLE

Richard McCabe for The Audience at the Gielgud

Adrian Scarborough for Hedda Gabler at the Old Vic Theatre

BEST ACTRESS IN A SUPPORTING ROLE

Anastasia Hille for The Effect at the NT Cottesloe

Cush Jumbo for Julius Caesar at the Donmar Warehouse

The Master and Margarita designed by Paul Anderson at the Barbican

Constellations designed by Lee Curran at the Royal Court & the Duke of York’s.

Sweeney Todd designed by Mark Henderson at the Adelphi Theatre

Sweeney Todd designed by Paul Groothuis at the Adelphi Theatre

Top Hat designed by Gareth Owen at the Aldwych Theatre

Top Hat designed by Jon Morrell at the Aldwych Theatre

Sweeney Todd designed by Anthony Ward at the Adelphi Theatre

The Audience designed by Bob Crowley at the Gielgud Theatre

Top Hat designed by Hildegard Bechtler at the Gielgud Theatre

The Bodyguard designed by Tim Hatley at the Adelphi Theatre

Goodnight Mister Tom at the Phoenix

Cinderella at the St James Theatre

Hansel and Gretel at the NT Cottesloe

Room on the Broom at the Lyric Theatre

Matilda at the Cambridge

The Phantom of the Opera at Her Majesty’s Theatre

Wicked at the Apollo Victoria Theatre

Aeternum by the Royal Ballet at the Royal Opera House, choreographed by Christopher Wheeldon

A Streetcar Named Desire by Scottish Ballet at Sadler’s Wells

Marianela Nunez for Aeternum, Diana & Actaeon and Viscera, the Royal Ballet at the Royal Opera House

Lez Brotherston for the set and costumes for Sleeping Beauty, New Adventures at Sadler’s Wells

Mark Rylance for Twelfth Night at Shakespeare’s Globe & the Apollo

Helen Mirren for The Audience at the Gielgud

Billie Piper for The Effect at NT Cottlesloe

Hattie Morahan for A Doll’s House at the Young Vic

Kristin Scott Thomas for Old Times at the Harold Pinter

Jeremy Herrin for This House at the NT Cottesloe & NT Olivier

Simon McBurney for The Master and Margarita at the Barbican

Stephen Daldry for The Audience at the Gielgud

OUTSTANDING ACHIEVEMENT IN AN AFFILIATE THEATRE

The production of Red Velvet at the Tricycle Theatre

Einstein on the Beach at the Barbican Theatre

Music Theatre Wales for In The Locked Room/Ghost Patrol at the Linbury, Royal Opera House

Bill Deamer for Top Hat at the Aldwych

Scot Ambler for Chariots of Fire at Hampstead & the Gielgud

Stephen Mear for Kiss Me, Kate at the Old Vic

Sweeney Todd at the Adelphi

A Chorus Line at the London Palladium

Cabaret at the Savoy

Kiss Me, Kate at the Old Vic

BEST PERFORMANCE IN A SUPPORTING ROLE IN A MUSICAL

Leigh Zimmerman for A Chorus Line at the London Palladium

Adam Garcia for Kiss Me, Kate at the Old Vic

Debbie Kurup for The Bodyguard at the Adelphi

Sian Phillips for Cabaret at the Savoy

BEST ACTOR IN A MUSICAL

Michael Ball for Sweeney Todd at the Adelphi

Alex Bourne for Kiss Me, Kate at the Old Vic

Tom Chambers for Top Hat at the Aldwych

Will Young for Cabaret at the Savoy

BEST ACTRESS IN A MUSICAL

Imelda Staunton for Sweeney Todd at the Adelphi

Hannah Waddingham for Kiss Me, Kate at the Old Vic

Heather Headley for The Bodyguard at the Adelphi

Summer Strallen for Top Hat at the Aldwych

Top Hat at the Aldwych

Loserville at the Garrick

Soul Sister at the Savoy

The Bodyguard at the Adelphi

The Audience at the Gielgud

Constellations at the Royal Court Upstairs & Duke of York’s

This House at NT Cottesloe