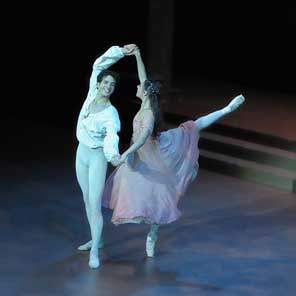 I have been a fan and a follower of English National Ballet since I was seven when I was taken to my first production of The Nutcracker and subsequently have seen their production every Christmas since. I first saw ENB’s Romeo and Juliet when I was a teenager ‘in the round’ at the Royal Albert Hall and have been captivated ever since. One thing I like about ENB is their individuality. Their Nutcracker is well known for having a quirky side and this production of Romeo and Juliet, although still hugely traditional had some cheeky and fun elements I haven’t seen elsewhere. In addition to ENB’s, over the years I’ve seen Romeo and Juliet productions by The Royal Ballet (Sylvie Guillem’s last ever Juliet I might add) and American Ballet Theatre in New York. All are different and unique in their own way.

The first thing that strikes me with Romeo and Juliet is the music. I have never come across a piece of classical music so emotive and able to capture the mood perfectly. This music can move people to tears, give them goose bumps and enables them to feel the electricity between the ‘star-crossed lovers’ on stage. At this point I will say that, as ever, the ENO orchestra does a fine job orchestrating their ballets.

Wednesday night’s production opened on a rather sinister scene with a group of hooded characters appearing to be placing bets or plotting an evil scheme. This theme continues throughout with the occasional reappearance of these characters adding to the underlying sinister nature of the story. I was thrilled to see Erina Takahashi as Juliet, I met her when she was in the corps de ballet and I was just a young dancer and remember her as being very sweet and humble. As I’ve seen so many ENB productions I feel I know some of the dancers, so to see one perform who I’ve actually met was even better. Arionel Vargas is a dancer I don’t know well, but on first impression he was a fine Romeo, in stature alone he commanded the stage, but it was in his solos where he truly excelled.

True to form, ENB creates a busy crowd scene with lots of action and depth. The two rival families are distinguished by costume, Capulet’s in red and Montague’s in green and any neutral parties in creams and greys. Tensions were easily built in the opening scene with the rivalry apparent immediately. Scenes of taunting were played out with a hint of ‘cheekiness’ as the male characters quite regularly made gestures to their own and their rival’s genitalia! In these scenes the jovial nature of Romeo and his comrades, particularly Mercutio, made for light interjections within the tense stand-offs. In fact, in Act 1 Juan Rodriguez, who plays Mercutio, impressed me the most with a highly energetic allegro solo, full of intricate footwork combined with impressive leaps, all performed with great gusto.

Our first meeting of Juliet is brief but necessary to understand her placing within the family and her arranged marriage to Paris. In this scene, ENB shows off its unique directional skills with extra little amusing actions in one corner of the stage. Behind Juliet and her friends’ graceful dancing and excited game-playing, her Nurse is seen to be in rather a compromising position with a male servant. Not everyday you see that in a ballet!

My favourite scene has always been the ball scene, partly for the music (amongst everything else, I am a musician also) but also for the core part of the Romeo and Juliet story: the couple’s first meeting. Takahashi’s delicate and innocent performance, which we see briefly earlier in Act 1, really comes to life in the ball scene. Her relationship with Tybalt is playful, with Paris she is cautious, but her movements are tinged with a hint of curiosity. When the pair meet, the chemistry is immediate. These two dancers obviously trust each other implicitly, which is shown in the combination of lifts and complex pas de deux work. This becomes even more apparent later, when they perform their love duet, and also in the death scene. ENB’s ball has a distinctly Russian feel with the costumes rich in colour and the movements strong and timed to perfection. This scene is as impressive as any other I’ve seen and really shows the company to be a well oiled machine.

After the couple meet and are subsequently separated, the scene which follows is in Juliet’s balcony/garden and this is where their love really takes off. One of the most beautiful scores in ballet, in my opinion, I was glued to the performance Takahashi and Vargas were giving. The only criticism I have is that there were a lot of steps and movements fitted into music. What I have found in other productions of this scene is that less is more. We know they’re in love and we know that they can’t get enough of each other, and I feel that ENB’s production just tried to fit as much into the scene as possible. The pas de deux was excellent, dynamic and passionate but at times unnecessary. Simply embracing, lifting slowly and being gently intimate would have conveyed exactly the same feeling as the fast-paced, energetic ‘throwing around’ which I saw. I am still partial to Kenneth MacMillan’s 1965 choreography, after all I am a traditionalist at heart! The dancing, however, I cannot fault, beautifully exuded by both, the scene ended with goose bumps on my arms and a silly grin on my face.

Short and sweet, well I say sweet, perhaps not as two deaths are involved, but short definitely! In this scene we are witness to the murder firstly of Mercutio then of Tybalt. Now here is where ENB again shows its quirkiness and unique design and direction. Ever the joker, Mercutio first taunts Tybalt into a play fight, which turns into his ill-fated final moments. Previous to the fight, Mercutio has already feigned injury, to which the surrounding crowd of both families watched in amusement as they are used to his horse-play. When he is, however, fatally wounded, his pleas for help are unanswered and a story of ‘boy who cries wolf’ unfolds. After an elaborate display of pain and anguish, he finally dies (always played out as long as possible in every version of this ballet I’ve seen) and the villagers go into shock. Drama unfolds as a reluctant Romeo takes up a sword and fights with Tybalt until the latter’s death. The fight scenes are always hard to achieve in ballets, to not make them over-dramatic is not easy when all that is possible is a combination of dance and fencing, however somehow it works. These were technically superb but as always, a certain amount of suspending disbelief is required from the audience, but isn’t that the nature of ballet itself anyway?

Upon Tybalt’s death, the devastation is shown clearly by Juliet, who then goes on to end the act. Her lover has killed her cousin and she is torn between family loyalty and all-consuming love for Romeo. Again I will say that Takahashi was wonderful in portraying every side of Juliet. Whilst Vargas, a fantastic, exuberant dancer with the stage presence and technical ability of a superb Romeo, unfortunately quite often had the same look on his face, regardless of the scene. A minor complaint for a dancer whose allegro ability impressed even my boyfriend (who was on his first ever outing to a ballet)! As Romeo is banished to exile, Juliet is left with her thoughts and the curtain goes down on this frail young woman.

Everyone knows where the story goes, and act three begins with Juliet and Friar Lawrence hatching a plan for Romeo and Juliet’s reunion. I find that this scene can be rushed at times, but the ENB produces a nice combination of mime and story telling. As Friar Lawrence is describing the plan to her, we see inside Juliet’s mind as she thinks about the plan unfolding. Two ‘look-a-like’ dancers act out her thoughts in one corner of the stage and we see, in her wild imagination, that the plan is flawless and that she and Romeo will be reunited and live their lives together in exile. With that in mind she heads home.

Prior to the next scene where she reluctantly agrees to marry Paris for her parents, we see Juliet rebelling against her mother and Nurse in a vain attempt to be left alone to her plans. The difference in status between all the characters is very evident here, the pleas of a young Juliet, the mothering nature of Nurse, the coldness of Lady Capulet and finally the strength of Juliet’s Father. This scene can be heart-wrenching as we see Juliet cowering in the arms of her Nurse who she sees as more of a mother than her own, especially when Lady Capulet uses her hand against her daughter. The entrance of Lord Capulet changes the mood of the scene immediately as we see Juliet pale into submission against the high status of her father. She agrees to marry Paris and as a satisfied trio of her Nurse and parents leave to prepare for the big day, Juliet’s mind once again wonders into fantasy. Torn apart by despair, Juliet sees two visions of Romeo and Tybalt each with a different enticing idea for her. In an intricate pas de trios, Juliet must decide between family honour in killing herself with her cousin’s dagger or following her love by taking Friar Lawrence’s poison and running away with Romeo. With another appearance from the cloaked and masked figures previously seen, Juliet decides on the love option and takes the potion, falling gently asleep.

The final part of the performance was over and done with fairly quickly. Unlike some other productions where these death scenes are long and drawn out, this was simply done and very effective. Friar Lawrence’s attack and death is brief but shocking and Romeo’s murder of mourning Paris is also less dramatic and more to the point. The longest section of dance was where Romeo discovers Juliet’s body and believes she’s dead. In a long display of anguish, Romeo takes Juliet’s lifeless body and tries to revive her. Takahashi proved to be a very believable corpse as she was flung around with no hint of life in her. The production ends as any other would, with Romeo and Juliet dying for each other in a misunderstanding only Shakespeare could achieve. The audience barely drew breath as they watched Romeo take his own life to join his love in the after-life, and then Juliet’s sleepy confusion, which turns to joy and then quickly to misery really tugs at the heartstrings. The resolution between the two families happens very quickly after this, and almost seems like an after thought, added in quickly to end the story. The performance rounds off neatly however, with the first sinister hooded characters dancing delightedly across the stage as the curtain lowers.

I thoroughly enjoyed this performance, there really is very little to criticise, however there are things which I would have preferred to have seen done differently. Regardless, ENB employs beautiful dancers and although they are not seen to be as technically brilliant as other companies such as The Royal Ballet, they are some of the most expressive performers I have seen on stage. The cast I saw worked very well together and built up trusting relationships immediately. A must see if (or when) it comes back to the Coliseum or Royal Albert Hall next time.

Written by Natasha Wynn
London based performer, graduate of London Studio Centre who’s been auditioning and working in the industry for two years and now auditioning for post-graduate and masters courses. For more information on Natasha visit www.natashawynn.com