One of the brilliant things about theatre is its ability to transport you. Well, if you want to be transported to another world, get yourself down to Saucy Jack’s.

Upon entering the theatre, located at the back of the King’s Head pub in Islington, you are hit with an incredibly exciting atmosphere. Cast members dressed up in eccentric costumes wander around a brightly coloured set of a cabaret bar interacting with the audience and handing out “Space Vixen” badges while music plays from a stereo.

The show never actually seemed to start; it just sort of morphed into the opening of the show with the charismatic club owner Jack (played excellently by Hugh Stubbins) introducing us to the first act. It has to be commended how brilliantly the entire cast related with the audience, keeping us all very much engaged, and perfectly juggling the audience participation with commitment to telling the story of the show, and this opening moment was a great example of that skill.

The piece is crazy. It is very Rocky Horror Picture Show-esque, and it definitely had a cult following in the audience that night. Dotted around were audience members covered in glitter and singing along, which added to the experience. The audience was fantastically receptive and roared with laughter throughout, which made the atmosphere electric. I may not have arrived as part of the Saucy Jack and The Space Vixens fan club, but I definitely left as part of it.

The whole cast were brilliant, but a special mention has to go to Caspar Cordwell James who played Booby Chevalle, a waitress with stars in her eyes. Cordwell James managed to find the exact balance between being wonderfully comical and genuine and truthful. The character doesn’t lack dimension in a way a pantomime dame might, but instead manages to warm our hearts so much so that I think Booby was my favourite character.

Our leading ladies have to be congratulated as well. Firstly, Jamie Birkett, who played the fiery leader of the Space Vixens, Jubilee Climax. She portrayed the fantastically strong character with ease and wonderfully majestic physicality, juxtaposed beautifully during a flashback sequence when she plays her more timid and quiet past self, Honey Tipps.

I was also incredibly impressed by Sophie Cordwell James (she and Caspar are brother and sister. Talented family!). Although she portrayed three different roles, whenever she was on stage she just lifted the energy to new heights. Her characters were funny and likeable and she has a voice that will blow your mind.

Saucy Jack and The Space Vixen was entirely mad but completely fantastic. If you want an incredibly fun night out, I cannot recommend it enough.

In a seedy cabaret bar on the dark side of a distant planet, artistes are being picked off by a serial killer with a penchant for sequins… SaucyJack and the Space Vixens is a truly immersive theatrical experience. The audience are the patrons ofSaucy Jack’s bar, relaxing at tables, drinking and dancing while the show explodes around them.

Having delighted audiences around the world for over 20 years, including three West End runs, this award-winning musical is back in the capital with a transfer of its exuberant cyberpunk production fresh from the Edinburgh Festival.Saucy Jack and the Space Vixens lands at the King’s Head Theatre in Islington for four weeks of glitter-fueled fun from April 26th. Dust off your glitterboots, set your disco beams to stunning and join in with this all singing, all dancing, disco spectacular. 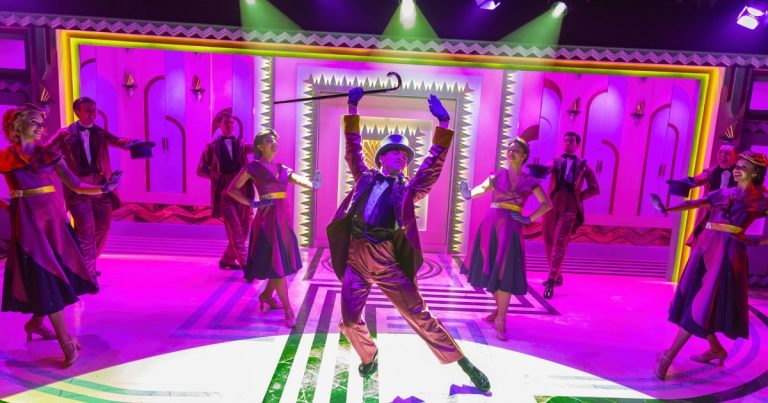 This is the sort of review in which I shall quickly use up all the superlatives I know! First seen in 2021 at Sonning, Top Hat was so successful that it has justifiably just been revived. What a show! Every aspect of it is superb Firstly, of course, the 1935 Astaire/Rogers movie on which it…