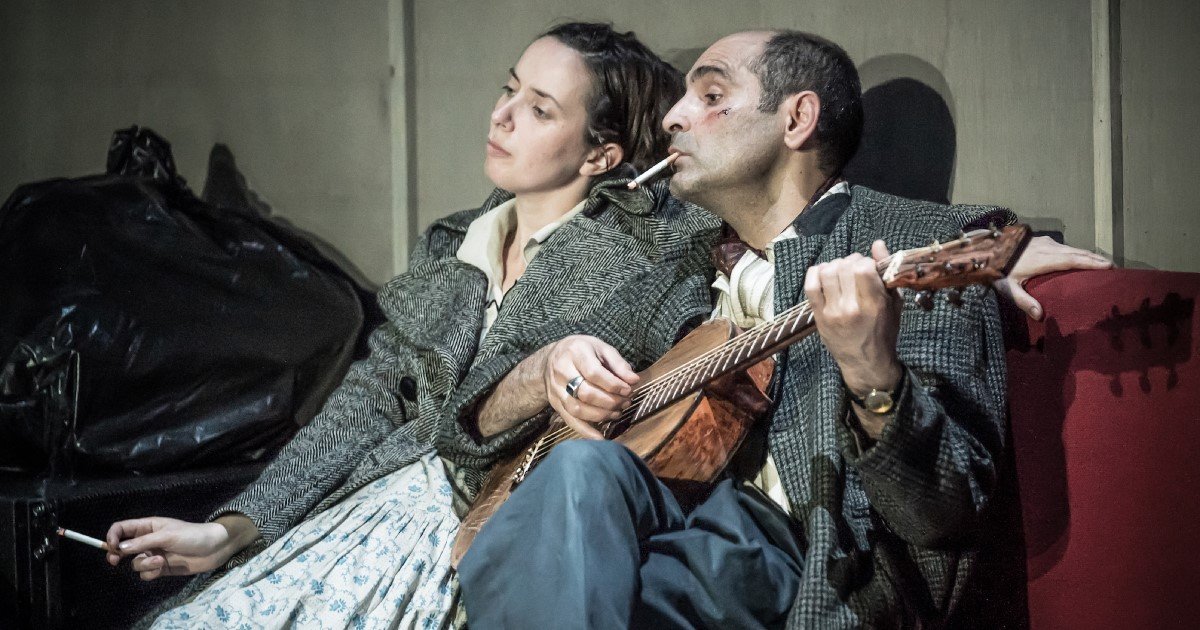 THE TWO CHARACTER PLAY was Tennessee Williams’ only play to receive its premiere in the UK – in 1967 at Hampstead Theatre, where it is now being revived.

Felice and Clare are two actors on tour and are also brother and sister. In a decrepit theatre in a small town they find themselves deserted by the rest of the company with an audience already in the theatre, they enact The Two Character Play, an “Outcry”(the play’s alternate title) from isolation panic and fear. The style of the play is by no means naturalistic owing much to Pinter, Beckett and Theatre of the Absurd showing Williams being ready to experiment much more than in previous plays.

Hampstead’s production is as lavish as a play for two people can be. The director, Sam Yates, clearly loves it and as well as raw energy, also brings out the continual pathos within. It is as though every word, every gesture has been fully considered before being used and even then, reconsidered.

Kate O’Flynn plays Clare, psychologically damaged by the sudden death of her parents, a role based on Williams’ sister, Rose. She not only has to be Clare in ‘real life’ but also plays “Clare” in the play-within-a-play style of the piece. Yates attempts to make it clear when we are seeing real life and when the play by having the actors speak with an English accent in the former and in their version of a deep south American accent in the play, but the two “Clares” eventually seem to become one and the same person… O’Flynn is particularly successful in communicating her roles, especially physically: by the end she looks a wreck of a human being.

Zubin Varla also expends great energy in being the two people called Felice, a role based on Williams as he saw himself. He seems at times almost able to break out of his mental trauma, but in the end there is no end: “It’s possible for a play to have no ending in the usual sense of an ending, in order to make a point about nothing really ending”. He is allowed more variety in his twin roles than Clare is, and makes the most of it. He is at his best when using his physicality to try to escape the straight-jacket of life, especially when it comes to moving the set around the stage and climbing in and out of the window and is always convincing to the audience even when he cannot convince himself.

The single complex set has been imaginatively designed by Rosanna Vize to allow the actors complete freedom to express the text: at first it looks a mess, until we begin to realise that everything has a purpose.

Lee Curran’s lighting design cunningly enhances the varying moods, without ever drawing attention to itself, which is just as it should be and Dan Balfour’s complex sound design greatly aids the creation of atmosphere, again without being obtrusive.

At the time of the premiere fifty-four years ago, reviews were “mixed” as James Roose-Evans says in a fascinating programme note, and in spite of Williams revising it several times, it has never gained a secure foothold in the canon of his plays, despite fairly frequent revival. Perhaps this present production will change all that.

A doctor once told me that we were the bravest people he knew. I said, “Why, that’s absurd, my brother and I are terrified of our shadows.” And he said, “Yes, I know, and that’s why I admire your courage so much.”

Fellow actors, and brother and sister, Felice and Clare have been on tour far too long. Abandoned by the rest of their troupe, all that’s left is each other, an empty stage and an expectant audience. They will have to adapt accordingly and perform the only appropriate work in their repertoire: The Two Character Play…