Like so many children born in the 1950s, I grew up to a backdrop of the iconic Julie Andrews film. Our mother was obsessed by it. She had five of us already but augmented our number with foster kids to bring us up to the requisite seven. She dressed us in stripy curtains, put our hair in plaits and taught us all the songs, how to yodel and how to do that thigh-slapping dance. She called our youngest sister Martha, along with the cat. I must have sat through that over-long schmaltzy film a dozen times. So while delighted of course for him, for personal reasons I was not looking forward much to a summer immersed in the songs of The Sound of Music when our son was cast by Jessica Ronane as Kurt von Trapp.

Well how wrong I was.

From the first preview at the Open Air Theatre at  Regent’s Park, I’ve been unable to stay away. This production, directed by Rachel Kavanaugh and with choreography by Alistair David, keeps the romantic heart of the film but clothes it in a revived realism, wit, and musicality. I can honestly write that it is not just because our son is in it I think it truly a masterpiece. Where to start?

First, the staging. The sunrise colour of the glorious set, convincingly and simply adapted from scene to scene, from Nonnberg Abbey to Von Trapp family home to Salzburg concert stage, is beyond romantic. The nightly dying sun at Regent’s Park bathes it in a light of new romance as Maria, played with tuneful and intelligent innocence by Charlotte Wakefield, discovers her love for the captain, with his newly-fashionable name, Georg.

Michael Xavier is handsomely princely in this role, and by the end has captured the hearts, not just of Maria but many women and possibly men too in the eclectic audiences that are packing out this thousand-plus seater theatre night after night.  In this unique setting, the production is in tune with nature itself. When it rains, it rains as Maria sings ‘raindrops’. Even the occasional flash of real lightning seems magically coordinated with ‘Lonely Goatherd’ as the children run for safety to the bed of their new nanny.

The words we parents and many of those coming to see the production in preview keep using to describe it, besides the obvious ‘magical’ and ‘incredible’, are ‘tight’, ‘smooth’, ‘seamless’, ‘brilliant’, ‘sharp’. So much of it is just so funny. How can dance moves have been made so clever and so funny? How WAS that done?

But the serious underlying plot, the threat of the Nazis to life and liberty, is not underplayed. Tim Frances is thuggishly convincing as Herr Zeller but the real baddies here are the background, the war, the Nazis, the unthinking evil that inspired the ‘peaceful’ Anschluss, placing Max Detweiler, rendered with likeable humour by Michael Matus, in such a terrible dilemma. Under Stephen Ridley’s musical direction, the songs have been sensitively changed to different keys, with new settings and minor harmonies that give them a surprisingly fresh edge. There are also some really interesting songs we’ve not heard before in either the earlier stage or film versions.

The strong moral lessons of The Sound of Music are brought out so much better in this production than the film. It works on so many levels. I felt sorry for the feminist forerunner, Caroline Keiff’s Elsa Schraeder, as she tries but fails to be the homely wife the captain desires. She makes a joke of it but it is clear she really would prefer to be smoking cigars in a boardroom rather than running up clothes from curtains, and wouldn’t we all! Or perhaps we wouldn’t.

The nuns are also something else. Light, shade, Benedictine chant and spiritual, almost liturgical dance formations, are used to evoke the seductive appeal of a lifetime of chastity and celebration. It is not difficult to see why Maria wants to run away to the Abbey rather than face what life and God are calling her to do. Special mention must go to the Mother Abbess Helen Hobson, with her compelling rich voice. Instead of singing her solo gazing out of a window, as in the film, she and Maria are in intimate communication, taking ‘Climb Every Mountain’ to new and interesting heights. The concept of desire in a nunnery is treated with delicacy but it is not stinted.

And then there are the children. Another reviewer has already written that this production will be made, or otherwise, by its children and even acknowledging my own natural bias, I cannot say enough in praise of how hard they have worked and are still working, and what they have achieved. 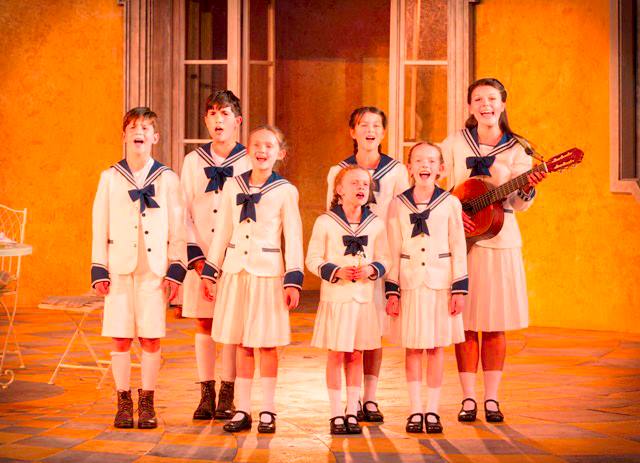 There are three teams of the six younger children topped off by the seventh, Liesl, 16 going on 17, played consummately by Faye Brookes. With her lovely voice and a creamy complexioned heart-shaped face, she really holds our hearts in her hands and it is baffling that Rolf Gruber, shown in his adolescent blond Nazi infatuation by the endearing Arts Ed graduate Joshua Tonks, should find there is any choice at all to make between ideology and love.

It is in productions like this, demanding a large number of highly skilled ‘triple threat’ children who are trained in singing, acting and dancing, that top theatre schools such as Sylvia Young and Redroofs come into their own. SY especially dominates the credits and it is surely a strong possibility that many of the younger childen, the Gretls and Martas, might also find their way there eventually.

Finlay Banks plays Freidrich, the oldest boy. He attends Top Hat stage school and was in Ragtime at Regent’s Park last year. He has a mature understanding of his role and a particularly strong voice that, in his rare solos lines, rings out with that enchanting quality of the boy’s unbroken voice through the dusk at Regent’s Park.

Elise Bugeja plays Louisa and brings across her mischievous side with clarity and understanding. She is at Sylvia’s and was a cast member in the previous tour of The Sound of Music. Seeing children like her on the stage is like seeing witnessing the formation of secret treasure before your eyes. You want them to grow up to see what they can become, while wanting them also to stay children for ever.

Our son, Arthur Gledhill-Franks, another SY student, plays Kurt. To avoid accusations of bias I will merely quote my Times colleague Sarah Ebner, who came unbeknown to us to the opening preview. ‘Was he the one who hit the hight note and got a round of applause, as we were among the applauders?’ she tweeted afterwards. Yes he was! When we choose to picnic outside rather than go to the show, we hear his solo top note, ‘Goodbyeeeeeeeeeeeee,’ fly out over the treetops of the park and beyond. I always wonder how far it goes, and experience a twinge of regret that his former life as a chorister at the Chapel Royal has had to end. But despite what I might have wanted for him, he wants to be an actor.

Isabelle Allen plays Brigitta. This is the biggest of all the children’s parts and she carries it off with consummate skill, with one comic intervention in particular reducing us and the audience to helpless laughter, every time we see it. Her character is the brightest of all the children and she has the wit to play to this strength while retaining the innocence of the child. Her face will be familiar to many because she starred as Cosette in the hit film of Les Miserables and was the poster girl for the film, for which she was nominated for a Screen Actors Guild Award among many others. She is completely unaffected by her life on the red carpet and, with the other child actors, has helped put a heart into our little Von Trapp family that is becoming almost as real and close off the stage as on it.

Marta is played by Amybeth McNulty. Amybeth is with the SY agency but is homeschooled in Ireland. She has trained at SY summer schools as well as the Dynamic Waves Performing Arts Academy and Forristal School of Dance. She and Isabelle could be sisters in real life. Endearingly wanting to be loved, she dances and sings her vulnerable little heart out through Do Re Mi and Lonely Goatheard. She gives us everything she has and as she and all the children perform their various marching, dancing and play-singing numbers, not at all ‘jazz hands’, but changing mood to fit the story, I’ve seen many audience members wipe tears from their eyes.

Finally there is the adorable Gretl, played by Honor Kneafsey. Honor has been in Scrooge, Carmen and, impressively, has had a part in Sherlock. On the first night of previews, Honor slipped as she ran across the stage after it was made wet by, among others, an exuberant Kurt splashing in the real-life moat. She landed hard on her bottom and the audience gasped. She must have been massively winded. Yet in spite of her tiny age and stature, she remained the consummate pro actor. She improvised her recovery perfectly and not a tear was shed, or a line missed, to the point where adults afterwards could be heard congratulating her on how well she ‘acted’ the tumble. She curls up on the stage and we fall in love all over again. What a star.

All these children have won our hearts and night after night, they win the hearts of the audience and of their grief-stricken father as Maria wins his love. They are just so brave. Not in a million years could I have ever done anything like this, as child or adult. Not being a professional in the industry, I cannot really say why, on a technical level, this production is so moving, or how it was made so, just that it is. Try and see it if you can but don’t break your own heart if you can’t because already on many nights it is sold out. Your chance will come, because it surely has to be odds on for a transfer.