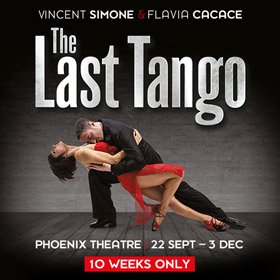 Strictly fans, rejoice! Vincent Simone and Flavia Cacace are back in London’s West End. Though for many dedicated fans, this is also a sombre affair as the famous BBC dancing duo are taking this tango as their last. Past West End shows include Midnight Tango and Dance ’Til Dawn but now the tango champions, who have danced over twenty years with one another are bidding adieu in what they say is their ‘most moving production’ yet.

The base of the show is memory and looking back on your life. And with this comes looking back on achievements, highlights and love. Vincent and Flavia play the younger version of George and his love. We travel through their first meeting which goes into a blossoming relationship to them sharing the highs and lows of life together. With many musical accompaniments, both vocal and instrumental, the show aims to please its fans. And to an extent, it succeeds.

Though to a casual theatregoer or dance enthusiast, this show can seem, at times, on one level. The Last Tango can find itself lacking bite or without an excitement that puts it off from being the number one dance show to see this season.

The show begins in an expected lively routine before becoming a more monotonous romance in the first act. The chemistry between Vincent and Flavia is undeniable and the standard of dancing between not only them, but the entire ensemble, is exquisite. Though the cast are unable to lift the show out of it’s more dreary moments. Unfortunately it’s the creative but slightly morbid set design and the bland staging that renders the first act from being memorable. It’s hard to recognise the definition of events and we therefore get lost in a dance trance that seems to go on a little too long.

The second act vastly improves with more passion, more flair, more tango and a more lively turn of events. The musical choices are sometimes too standard (that being said, instantly recognisable) to deserve recognition but the musical direction of Jon Ranger deserves a nod alongside the arrangers and orchestrators, Chris Egan and Matt Smith who can try to lift the show at times by a simple note to which all cast are strong in-sync with. Sometimes the highlight of a number was the orchestra.

Vincent and Flavia are charming and tremendous performers who know how to entertain an audience. They deliver classic ‘Strictly Showbiz’ and glamour and the audience get what they come for. The show has done tremendously on tour, as expected but feels like a smaller and not as poignant show in the Phoenix’s one thousand-plus seat theatre. Regardless, Vincent, Flavia and the cast should be proud of what they show in this production and with over twenty years together and even more in dance, our two stars can look back on their history, including this show, and feel proud one being one of the best dancing duos. Not only for the UK, but the world.

Fresh from their sell-out hit shows Midnight Tango and Dance ’Til Dawn, Strictly Come Dancing  superstars Vincent Simone & Flavia Cacace have created their most moving production yet as they prepare to dance in their final ever London show following a hit UK and Ireland tour.

Twenty years of dancing together has seen them become TV favourites, World Dance title-holders, create and star in their own West End productions – but now it is finally time for the nation’s best loved Argentine Tango Champions to say goodbye to the stage in a thrilling, new, live performance.

Don’t miss your last chance to see this beautiful couple do what they do best live, in an intimate, passionate and explosive experience – it’s time for The Last Tango.