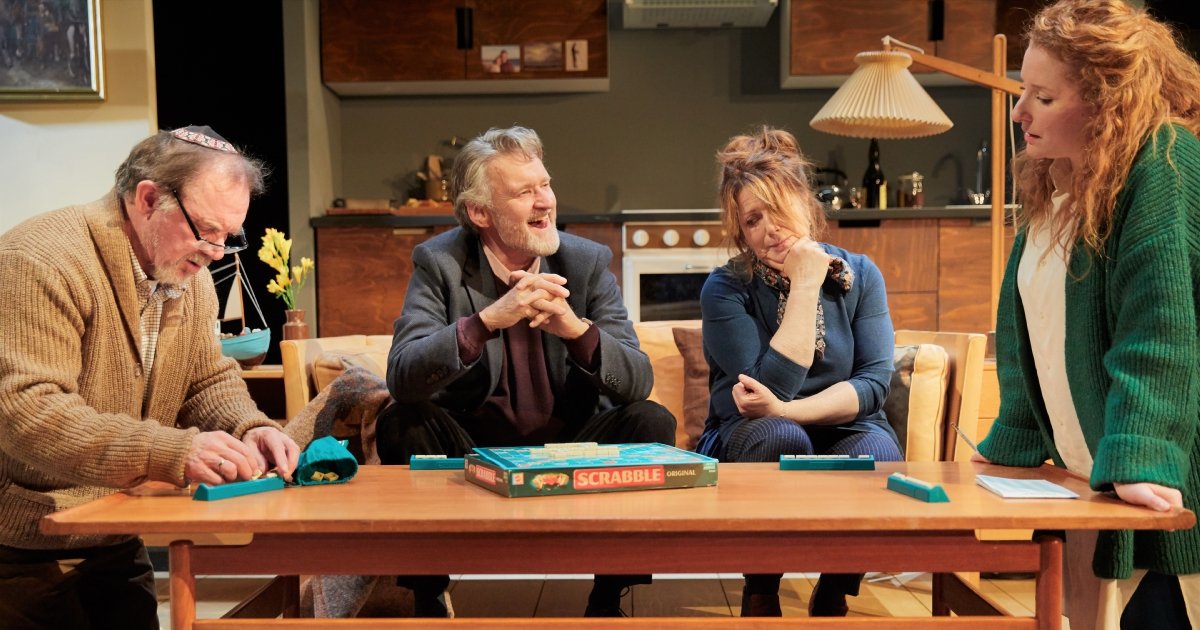 Denmark in 2001, a Jewish couple in their sixties await the arrival of a childhood friend and his daughter, as their celebration of Hanukkah begins.

The curmudgeon Abe (David Bamber is superb) is devoted to his forthright wife, Sara (Julia Swift), and plays the henpecked victim with nuanced irony. The pompous and annoying historical zealot Lars (Neil McCaul) is an old friend and adversary of Abe’s, the comic sparring between the Jew and gentile is well executed, if a little stereotypical.

Lars’ daughter, Eva, (Dorothea Myer-Bennett is excellent), is a cool academic, ever ready with a quip from Sophocles. She provides the voice of sanity, and a contemporary and gently contemptuous take on the bombastic certainties of both men; whilst hostess Sara shows her teeth if the two fading alphas step out of line.

Set against a crackdown on refugees in 2001, the near-contemporary plight of Muslims is juxtaposed on the historic evacuation of Jews in 1943, which Lars thinks improbable and Abe miraculous. A crisis of faith, a romantic triangle, an unexpected gift, an enigmatic letter, and a prodigal son are thrown in the mix, as the four are trapped for days in Abe and Sara’s home, whilst a snowstorm rages.

And amidst this, the eye strains to find the story amongst the many subplots, as the capable company work hard to make sense of the play. Is it about faith, history or the nature of passive resistance to evil? Or is it a romantic drama? A bromance? A generation raging against the failing of the light?

As the script laboured, the shouting started, and the blocking became clumsy. Sightlines were obscured, lines were delivered downstage, the back of one actor obscuring the face of another. Speeches were made from seated positions, facing away from the audience. Minor quibbles, one anticipates these problems will be speedily resolved.

There is some fabulous imagery. The meeting between the Jewish tailor and the Nazi. The reluctant hero. Patrol Boats withdrawn for maintenance. The small boy unwisely standing up to a Nazi guard. Misplaced loyalty. Old passions are revealed, so much that was forgotten, is still unresolved. Through all of this, runs the pragmatic courage of the Danish people.

But the exploration of the love/hate relationship between the aging childhood friends, the memories that they share, the secrets that they keep, does not adequately resolve.

This is the first stage play by talented writer and filmmaker A. Bodin Saphir, and has some excellent ideas, too many shown here. There were a dozen reveals, split evenly between historical tragedy and personal secrets. The effect was akin to the last episode of an abruptly cancelled soap opera.

Shame. There’s a decent play waiting in there to get out, and a talented company to perform it. It needs some savage cuts. And the director needs to turn down the volume and take advantage of the superb sightlines and acoustics of this intimate space.

Lots to like, and likely to improve during the run.

October, 1943. Seven and a half thousand Jews flee Denmark in fishermen’s boats, crossing the water to Sweden and to safety from the occupying Nazi regime. To some, a miracle rescue of biblical proportions. To others, the question remains: how did thousands of Jews slip through the grasp of the most powerful war machine ever assembled?

Hanukkah, 2001. At a remote home on the snowy Danish coast, it’s time for two old friends to bury the hatchet. Lars and Abraham have not seen eye to eye for decades, but old tensions refuse to thaw as Lars’ relentless pursuit of the truth concerning the flight of Danish Jews during WWII challenges Abraham’s faith, patience and memories. And when an old secret surfaces and threatens the very foundation of their relationship, fact starts to blur with fiction.

Park Theatre and Breaking Productions present the World Premiere of
Rosenbaum’s Rescue
By A. Bodin Saphir