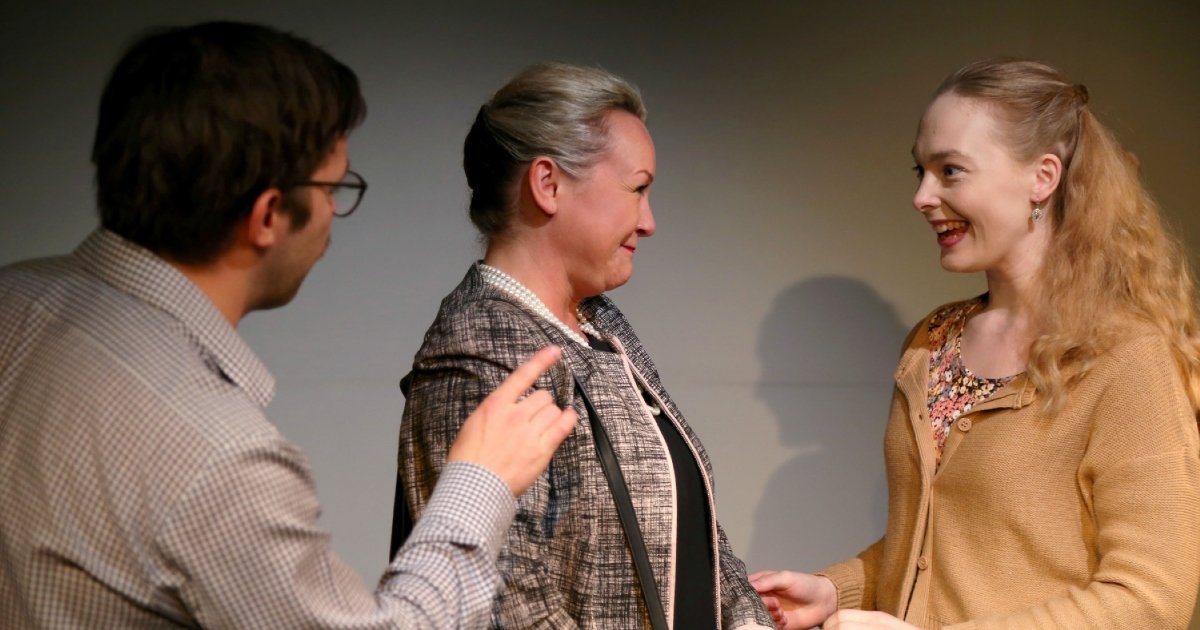 The Brothers Grimm meet the Macbeths in this latest version of Phillip Ridley’s 2015 macabre and often hilarious play. Almost four years later it is every bit as relevant: nothing has changed and if anything the “enough is never enough” message is probably more appropriate today.

Radiant Vermin looks at the lengths that we will go in order to gain a foothold onto the property ladder. Just how far are we prepared to go? Will we alter our morals for personal gain?

Jill and Ollie are a young couple who discover that they have been chosen to take part in a government-sponsored housing scheme. They are offered an apparently perfect property by the mysterious Miss Dee: the only catch is that there are no basic utilities. With Ollie’s help, a local vagrant unwittingly helps the couple realise their dreams – albeit temporarily

In sticking to the pristine white set similar to the one used in the play’s original Soho Theatre debut, director Dan Armour makes us focus on the quick-fire dialogue; brilliantly performed by the very plausible couple Jill (Laura Janes) and Ollie (Mathew John Wright). The authoritative and yet mysterious Miss Dee confronts the audience with our prejudices’. Making her First Knight debut, Emma Sweeney also expertly doubles up as the homeless woman who introduces herself as “the smell you were talking about”. We instantly empathise with this character who represents the plight of the homeless.

For Jill, nothing is ever enough: for each room “renovated” more need to be done. Ideas bounce well between Jill and the hapless Ollie. The couple interact through the fourth wall effectively, but possibly too intensely for a small theatre such as the Brockley Jack. One gripe is that the 15-minute garden-party scene towards the end of the play where the couple mimic their guests goes on for too long. This has the effect of leaving the audience nervously laughing outwardly, but inwardly screaming to be released.

Having said that the play’s 90 minutes fly pleasantly by leaving an animated audience free to thank their lucky stars for their positions on the property ladder.

Jill is expecting her first baby and she and her husband Ollie are desperate to find a home of their own for their new family… But HOW??

In this diabolically funny, vicious dark comedy a government department has found an ingenious solution to the twin dilemmas of housing shortage and homelessness. Be prepared to be appalled at yourself for laughing out loud at the horrors revealed in this wickedly funny play.

Home ownership is slipping out of reach: no matter how hard they work, it’s becoming more and more difficult for young people to buy a home of their own. Levels of homelessness are rising: more than 2,000 people a year will have no roof over their head and end up sleeping rough.

At a time of crisis in the housing market, how far would you be prepared to compromise your principals to secure a home for you and your family?