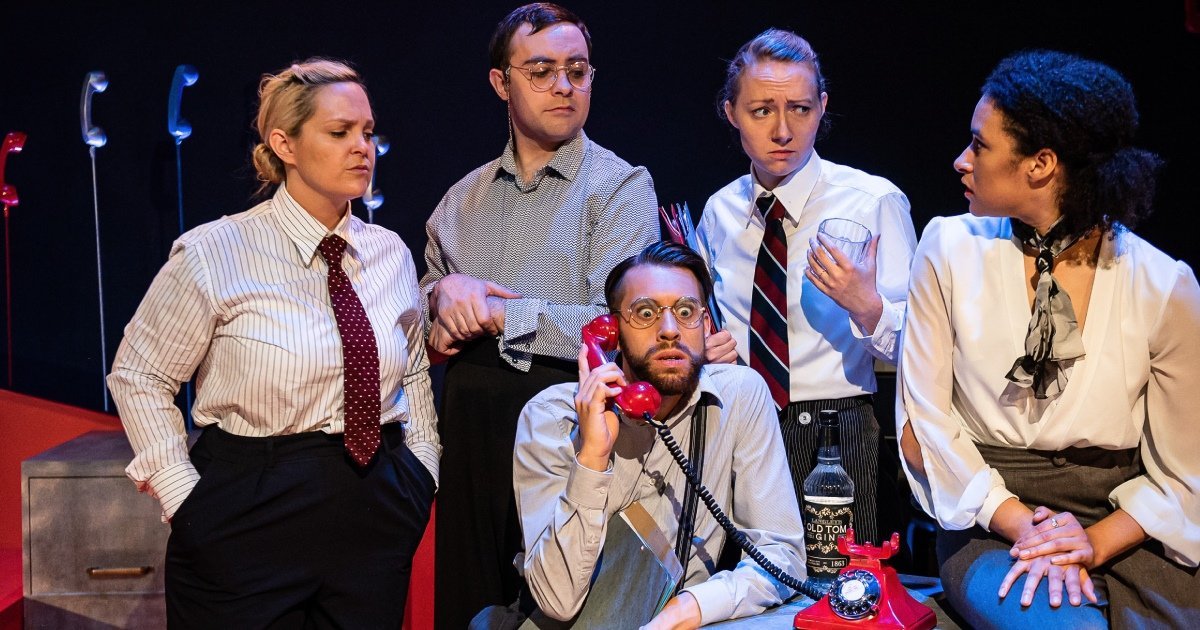 Operation Mincemeat is set in 1943 and as the audience arrives the mood is set by the dark, smoky atmosphere and wartime music playing in the background. The set is basic, just a few filing cabinets and a plethora of phones hanging from the ceiling.

Operation Mincemeat is the almost unbelievably true story of how the Germans were taken largely by surprise by the allied landings in Sicily because the body of a supposed Royal Marine Officer had been dropped off the Spanish coast with fabricated plans suggesting that the real invasion would be aimed at Sardinia and Greece.

The obvious weaknesses in this bizarre plan are worked through, the coroner Sir Bernard Spillsbury tells them not to worry about the Spanish establishing the real cause of death as there won’t be any real coroners just Greengrocers with a weird hobby. Jean (Rory Furey-King) is a keen female worker desperate to get involved in the operation. She is given a tip from one of the other women that should be taken to heart by all working women: “never admit that you know where the kitchen is”. Jean is roped in to be Bill’s (the corpse’s) fiancée and authentic receipts are needed from fancy restaurants, bars, gentleman’s outfitters and a jeweller. A tough job but someone had to do it!

The whole cast did an amazing job and must have been absolutely exhausted by the end of the play. All played multiple parts and sang and danced throughout. Jak Malone’s singing was beautifully sad as Hester, explaining how a lover would be writing to her sweetheart away at the front. The writing team of David Cumming, Felix Hagan and Natasha Hodgson and Zoe Roberts Split Lip have done a brilliant job writing Operation Mincemeat. Particularly Natasha as she is also superbly funny as Montagu the charmer who convinces the top Brass to go with this outrageous plan. I am going to Sicily next week and I might well be humming some of the songs.

The year is 1943 and we’re losing the war. Luckily, we’re about to gamble all our futures on a stolen corpse.
Operation Mincemeat is the fast-paced, hilarious and unbelievable true story of the twisted secret mission that won us World War II. The question is, how did a well-dressed corpse wrong-foot Hitler?

Operation Mincemeat is Singin’ In The Rain meets Strangers On A Train, Noel Fielding meets Noel Coward, in a new collaboration between three members of award-winning Kill the Beast and glam-punk composer Felix Hagan.

CAST AND CREATIVE TEAM
Written and composed by SpitLip.