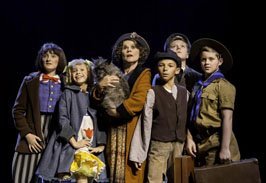 I had been very much looking forward to seeing this new revival of one of my favourite musicals, Gypsy. Upon taking my seat, I was filled with the eager anticipation of a person who was at the theatre for the first time. Then the overture began and I could feel the smile on my face begin to widen.

It is such a thrill to hear a full orchestra and even more so when they are belting out some of the most raucous, burlesque based music you are ever likely to hear. Luckily, I only sang along to the songs in my head but the urge to jump up and do my best Mama Rose definitely needed to be restrained by three strong men with a wheelbarrow.

Gypsy, “a musical fable” suggested by the memoirs of Gypsy Rose Lee, opens at a Seattle vaudeville house where “Baby June” and “Baby Louise” audition for a children’s show singing and dancing Let Me Entertain You. Their mother, Rose enters, calling “Sing out, Louise!” immediately establishing herself as the quintessential stage mother. In the next scene, Rose sings Some People, and explains her determination to develop June’s vaudeville career. Sceptical of Rose’s motives, her aging father refuses to subsidize the scheme, whereupon Rose rips her father’s solid gold plaque off the wall and hitchhikes to Los Angeles with the girls. There she meets Herbie, whom she entices to represent the girls’ act. At the same time, she dangles the possibility of romance and marriage in their duet, Small World. Through Herbie’s efforts, Baby June and Her Newsboys becomes a top vaudeville act but, as the years pass, June and Louise mature, vaudeville wanes, and the troupe is found in “two plaster-cracked hotel rooms in Akron.” Rose begins Louise’s birthday celebration with a breakfast of reheated Chinese food. Herbie arrives with “Mr. Goldstone of the Orpheum Circuit,” who offers a contract to save the day. A “forgotten Louise” sits with her present, a baby lamb, and sings Little Lamb (“I wonder how old I am.”)

We are then taken to a Chinese restaurant in New York, where Rose and Herbie discuss the next day’s audition at Grantzinger’s Palace. Herbie begs Rose to marry him and threatens, that if she does not, he may someday leave her.

Mr. Grantzinger does offer June a contract, but on the condition that “she go to school for a solid year and take acting lessons” and that Rose “stay away.” Rose, hearing this, storms out of his office. The girls, who dream of a normal life, sing If Momma Was Married, but to no avail.

In a theatre alley in Buffalo, Tulsa, one of the “Farm boys” in the act, tells Louise his dream of forming a dance team and performs the number All I Need Is the Girl. Louise dreams of being that girl, but is again disappointed. In the final scene of Act One, Louise brings Rose a goodbye note from June, who has herself run off with Tulsa. Rose is stunned. Herbie begs her to marry him and give up show business, and Louise urges her to accept Herbie’s offer. Instead, Rose announces to a horrified Louise that she will make her a star, and then sings “Everything’s Coming Up Roses” to conclude the act.

Act Two opens with a rehearsal of “Madame Rose’s Toreadorables,” a transparent reworking of the Baby June show. Louise rips off the blonde wig that Rose has provided and announces, “Momma, I am not June.” Rose tries to reassure her and, with Herbie, they sing Together, Wherever We Go. After a period of little work, Herbie finally gets the act – now “Rose Louise and Her Hollywood Blondes” – a two-week booking. To everyone’s surprise, the venue turns out to be a burlesque house. When Rose discovers this, she is adamant that the troupe withdraw. Louise however emerges as the voice of practicality: “Momma, we’re flat broke. We’ve got to take this job.” Louise learns that you don’t need talent to be a burlesque star when a trio of broken-down strippers sings You Gotta Have a Gimmick.

Rose has agreed to marry Herbie at the end of this engagement. She and Louise are packing to leave when the theatre manager announces his star attraction has been arrested “for soliciting” in the drugstore next door. Rose immediately responds, “My daughter can do it.” She begins to plan Louise’s costume, music, etc. as Herbie, revolted, tells Rose he is leaving her forever. Rose pushes her frightened daughter onstage, where Louise shyly sings “Let Me Entertain You” and, before the audience’s eyes, evolves into strip-tease performer, Gypsy Rose Lee. 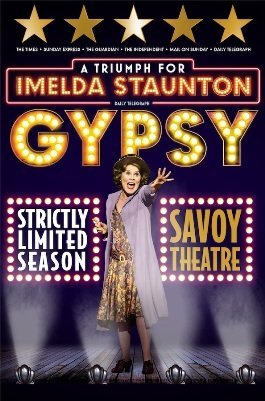 The penultimate scene finds Rose with Gypsy in her star dressing room at Minsky’s Burlesque in New York. Barely needed by her now successful daughter, Rose bristles at Gypsy’s independence and reproaches. She exits the dressing room, slamming the door behind her. Alone on the darkened, empty stage she sings Rose’s Turn. Gypsy enters from stage right where she has been watching and tells Rose, “You really would have been something, Mother.” They reconcile. Rose tells Gypsy her latest dream and they exit.

We first meet Baby June whilst at an audition. She has a smile on her face that suggests that she sleeps with a wire coat hanger in her mouth to make it permanent. She has the most annoying, sickly sweet voice that makes your skin crawl. She’s fabulous. From the back of the auditorium, we hear those immortal words “Sing out Louise” and here she is. Mama Rose. In this incarnation of Gypsy she is played by one of our very own greats, Imelda Staunton.

In the past, Mama Rose had been played by some of the greatest musical actors the world of showbiz has produced. Starting, of course with the legendary Ethel Merman. Angela Lansbury, Tyne Daley, Bernadette Peters and more. In my humble opinion though, I think the Brits win out on this one with Ms Staunton.

As she marches on from the back of the theatre, clutching her Yorkshire terrier, you know this is a force to be reckoned with.

Staunton has made this role her own. She is Rose. She is a constant tornado that blows across the stage owning it whenever we see her. She can belt out a number with such gusto that I’m sure I saw a man on the front row lose his toupee! I could go on about her for pages and pages so I am reigning myself in but suffice to say, I love Imelda.

She is also backed up by a very brilliant supporting cast. Peter Davidson plays the role of Herbie. The only man who truly loves Rose and tirelessly follows her persuading her to become his wife. Laura Pulver reprises her role as Gypsy Rose Lee and does so beautifully. We see her start as the tomboy and shy wallflower who blossoms before our very eyes to become the sexy, sassy Gypsy. It is a wonderful role played to perfection.

It is a tremendous show with some of the most memorable songs in musical theatre. Unlike some shows, it never dates and will be with us for a very long time to come.

If you can get a ticket to this show then do it. Stop paying your mother’s nursing home bills if you have to, just get a ticket. I have a feeling that it will run for some time but if Imelda Staunton stops doing it, they will have a very hard task finding someone to take her place. Did I mention that she is amazing? Oh, yes I did.

Based on the true life memoirs of legendary burlesque entertainer, Gypsy Rose Lee, it tells the tale of Momma Rose and her two daughters, Baby June and Louise, trekking across America in their family vaudeville act. But times are changing, audiences are expecting more, and the two girls have their own ambitions in mind. The rise of burlesque is upon them, and nothing will ever be the same again for Momma Rose.

A musical fable with book by Arthur Laurents, Gypsy has music by Jule Styne, lyrics by Stephen Sondheim suggested by the memoirs of Gypsy Rose Lee, choreography by Stephen Mear, designs by Anthony Ward, musical direction and orchestration by Nicholas Skilbeck, lighting by Mark Henderson and sound by Paul Groothuis. 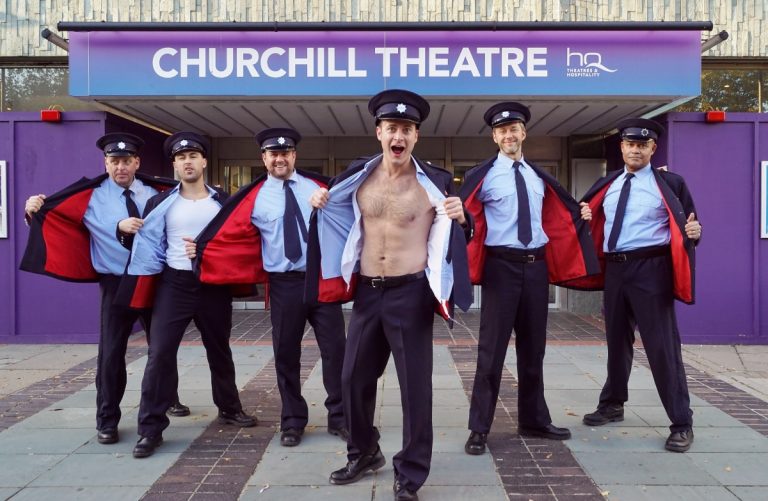 We all know the story from the 1997 The Full Monty film – six unemployed steelworkers who were made redundant and were strapped for cash. These six men who face real problems, like unemployment, self-identity, depression, sexuality, stole scraps of metal from the steel factory to sell and make a bit of cash. Gaz the…