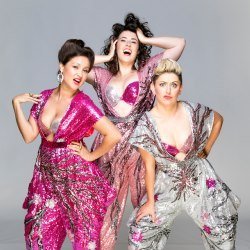 Ahead of their August residency at The Assembly Roxy upstairs at the Edinburgh Festival, The Fringe Wives Club exploded into the Southbank’s Udderbelly for One Night Only.

Fierce, feminist and full of sequins, this trio of high energy, award-winning performers left no doubt that they were here to make a stand against patriarchy and they were doing it through the medium of music and comedy! My favourite form of revolution!

Bursting out of a metaphorical womb the Glittery Clittery arrived on stage as though they were The Illuminati! Covered from head to ankle in black cloaks, they appeared as if they were taking part in some sacred ritual. However, the Fringe Wives Club is not shrouded in mystery, it is the very opposite – these women are very open about who they are and what they are doing, their “club” is about the empowerment of women and soon enough the cloaks were replaced with sequined jumpsuits where sparkly vulva’s adorned on their shoulders and big hair was decorated in glitter. Think ABBA but more camp and more sequins! (Yes, it is possible!)

From the moment the piece started I was spell-bound, these high-energy, talented performers have amazing stage-presence, their performance is slick, their harmonies on point and their raison d’être is to shout about consent and women’s equality.

The show runs at around 60 minutes and it is a hugely entertaining cabaret performance, the songs come with original thought-provoking lyrics, the dance movements have sass. There is a game show, some education on the female anatomy, there is audience participation, there is mime, there is charm and there is a call to action!

The best way I can describe their on-stage presence is to think about Destiny’s Child, if you take their harmonies, their power stance their feminist calls and their dance routines – if you then add sequins, glitter, more glitter, comedic lyrics and inspirational songs that really do make you want to cheer loudly mid-song, then you have The Fringe Wives Club.

The three powerhouse performers are all expert award-winning Australian artists, there is Tessa Waters, Victoria Falconer and Rowena Hutson. Together these women are unstoppable, they support each other on the stage, there doesn’t appear to be any ego or outperforming of one another, instead what we get is a postmodern glam-tastic troupe of performers who nod to Sheila’s Wheels, Muriel’s Wedding and Helen O’Connell (you’ll learn about Helen in the show).

The performance I saw ended with a full standing ovation coupled with loud cheers and whoops. This is a show that must be seen and to quote Tessa Waters, “it’s laughing whilst learning!”

Part explosive comedy cabaret, part interactive edu-tainment: this sequin-clad, champagne-fuelled, cosmic feminist extravaganza is guaranteed to blow minds and pants. The Fringe Wives are ready to smash the patriarchy with the full force of their combined, unquestionable talent and an empowering live soundtrack.

Fiercely funny, Glittery Clittery is a high-energy comedy party, busting with original live music, anarchic audience games, epic dance moves and DIY glamour + activism (a.k.a. #GLAMtivism). Brandishing weapons of entertainment, politically-charged passion and personal stories, the Wives dissect what it means to be a feminist today, undermining the fear that indoctrinates bigotry, sexism and homophobia, and skewering the lack of education that continues to shroud the female body. 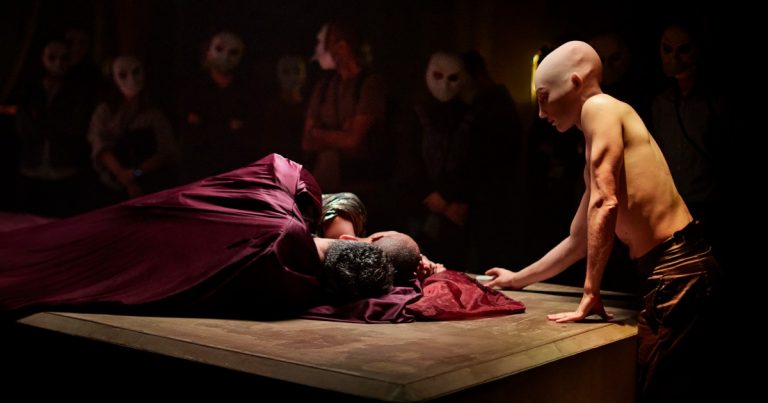 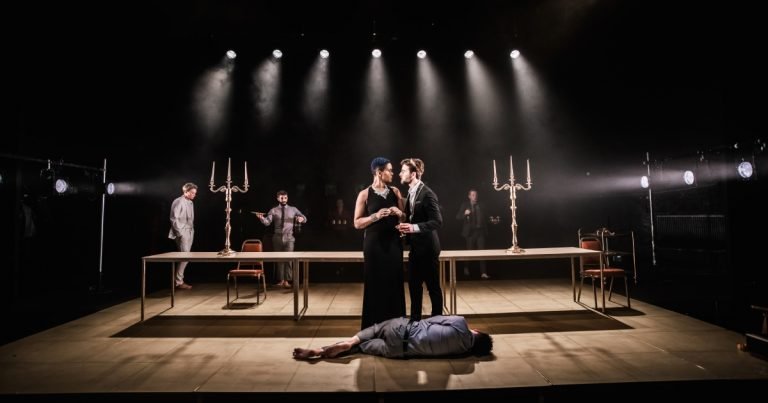 What is ‘power’? According to an online dictionary, power is the capacity or ability to direct or influence the behaviour of others or the course of events. However, even with this definition, whilst many people believe they have power, very few actually do. There is a moment in Game of Thrones when Queen Cersei, explains…