The Weimar Cabaret playing at the Barbican is a rich and deep delight of musical talent mixed with political nuance sensitively communicated. That this show is Barry Humphries’ Weimar Cabaret, Humphries best known for the not nuanced humour of Edna Everage and her gladioli should make this unlikely but in fact the evening’s success everything to his grand passion since he was a teenager for this era of German music, stretching from the end of the First World War to 1933 and the rise of Hitler, with a special emphasis on Berlin.

The evening is nearly all about the music, its combination of sensuosity and decadence mixing with the tragedy of hindsight to provide a foretelling of what was to darken the lives of those dancing and playing and loving in the time before.

Barry Humphries is, however, your host and compère for the evening so a light touch of humour is never far away. He opens with a brief, nostalgic chat about bookshops and carbon paper, a politically incorrect joke about European au pairs. His established fans are delighted, the rest of us may sigh. So far so Everage, no clues about the whimsical delights to come. Before us, the stage is populated by Humphries wearing a smoking jacket, often in an armchair and, among ferns and below the drapes of Cabaret red curtains sit the seventeen wonderful players of the Aurora Chamber Orchestra, one at a grand piano, another at his double bass, some are wearing hats. Also Meow Meow, global Cabaret Artist. Named as one of the ‘Top Performers of the Year’ by the New Yorker she comes with a distinguished reputation specialising in the Weimar repertoire and French chanson. Moving from humour to gaiety through to vulnerability, she commands the musical pause as a means of communicating emotional pain.

Leading the Aurora Orchestra is the extraordinary violinist and singer, Satu Vanska. She is a musical marvel and the vocal duet between her and Meow Meow is charm indeed while her performance playing the Stroh Violin is a marvel of wonder.

The evening ends with another duet, between Meow Meow and Barry Humphries this time, ‘The Ruins of Berlin’ from A Foreign Affair. It makes its poignant point very well and with that is content to send everyone home.

Barry Humphries is to be congratulated on putting together a triumphant show that is in turns joyous and moving and which is as redolent of the spirit of old Berlin as you are likely to find anywhere.

Barry Humphries is our masterfully seasoned emcee and cabaret diva Meow Meow our chanteuse in this risqué, sophisticated and seductive tribute to the jazz-infused music of the Weimar Republic.

Some describe it as cabaret’s golden age: the remarkable period in 1920s and 30s’ Berlin when hedonistic partying and social revolution turned nightclubs into hotbeds of decadent entertainment. Reawakening that spirit, our hosts acquaint us with the oft-forgotten composers of the time, many Jewish, whose art would be condemned as ‘degenerate’ by the Nazis, dancing as it did on the edge of a precipice.

Best known as Dame Edna Everage, Humphries shares his personal passion for a period that has long fascinated him, his witty anecdotes and irreverent asides providing interludes to a treasure trove of songs and instrumentals. Meow Meow gives us Kurt Weill standards alongside rarities from Friedrich Hollaender, Ernst Krenek and Erwin Schulhoff, both world-renowned Australian artists are accompanied by London’s trailblazing Aurora Orchestra. 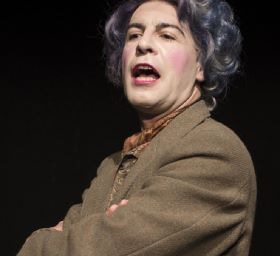